Yesterday saw Batman turn 1! Due to the fact I am 36 weeks pregnant and suffering with SPD, we decided not to throw him a party as such, but to do a bit of a buffet, in case people popped round to see him or to drop off cards or gifts – and so I didn’t have to cook!

The day started for me at 4am, when I woke. Sam usually wakes between 4 and 5am, so I decided it was pointless going back to sleep. I lay in bed twiddling my thumbs. At 6am, DaddyGeek woke up too, but Batman slept on! Typical Diva Baby!! Sam eventually woke up just before 6.30am. We all got up and got dressed, and had breakfast. I then entertained Sam in his playroom while DaddyGeek set up the camcorder in the lounge & inflated 30 ish helium balloons!

At around 8.30am, we all headed into the lounge and set to work opening all of Sam’s cards and gifts – this took a while! He is a very lucky boy!
Here’s a rundown of some of his presents. (in no particular order)! A ride on car, an activity table, a steering wheel, a car chase mountain toy, Play n Go BatCave, Batman & Robin play set, Raa Raa pyjamas, lots of books, a T-Shirt with co-ordinates on it – pointing to Old Trafford, an inflatable sofa bed, Duplo, a Peppa pig alphabet toy, money, a batman ball pool and balls. I told you he is a very lucky boy! (Please excuse my use of very dodgy names – I can’t remember half of the product names)!

Sam had a lie in, and he also took full advantage of his new sofa bed by having not just one nap as is normal for him, but THREE! He had a great time playing with his new toys, and having lots of visitors throughout the day. He enjoyed some party food, too. (a cheese and red onion muffin, a bit of pizza and some wotsits) – shh don’t tell DaddyGeek…. he doesn’t like him having crisps! Thankfully, despite some scary pains on Sam’s birthday Eve, Robyn
behaved herself and stayed tucked up safely yesterday, so Batman won’t
have to share his birthday with his baby sister!!

We lit the candle on his birthday cake later on, and I helped him blow it out. (ok I blew it out before he stuck his hand into the flame)! We were also super happy to find out his card was shown on cBeebies too! (We missed it, but will be downloading it soon, so I’ll add a blog post to show you)!! All in all, Sam had a fab day. He loved the balloons, and dragged a bunch of them around with him for most of the morning. He had a bit of birthday cake after his tea, and was definitely wired as a result: Note to self: no more sugary junk so close to bed time! It took much longer than usual to get him to sleep last night!!

Here’s a few photos from throughout the day!
Top-Left: Sam testing out his new sofa bed.
Top-Right: Early morning nap on mummy.
Centre: The cake!
Bottom-Left: his bunch of balloons!
Bottom-Right: How all the cool kids wear their new Raa Raa Pyjamas! 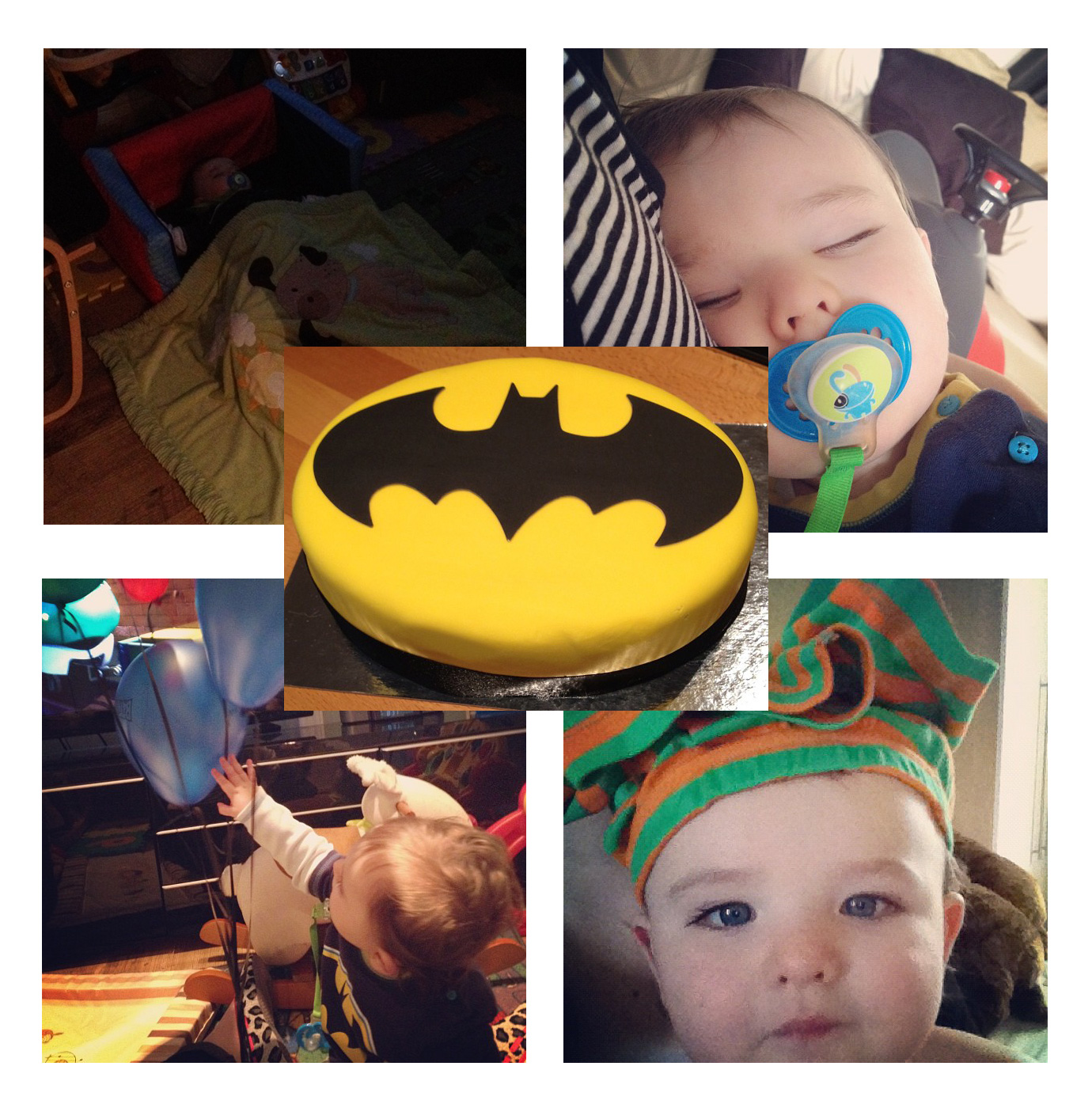