As Sydney is so clingy, I have taken to carrying her in a baby sling a lot of the time. She is much happier close to me than in her pushchair when we go out. Yesterday, I popped her into her sling and we headed out for a walk. (I was pushing Sam in the Mothercare Movix). 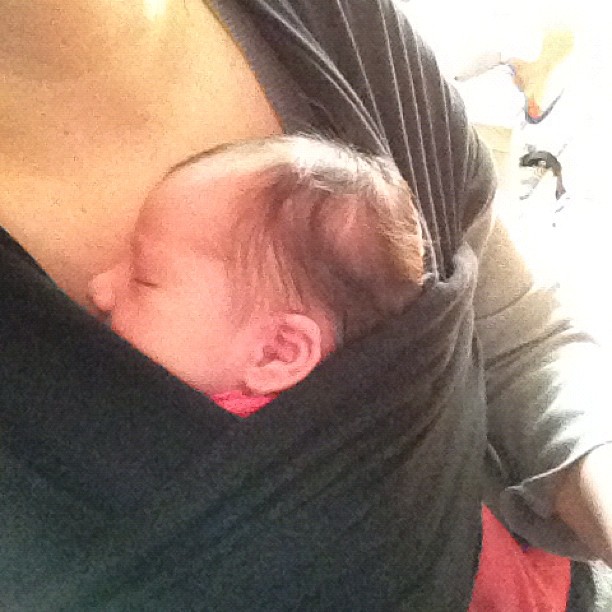 We walked into our local town centre (About half a mile away). While there, I noticed quite a lot of people looking at us. At first, I thought that was because the Movix is so bright, but then I overheard a comment someone made: “Oh my god – that’s child abuse. She’s got that poor kid tied to her. Could she not afford a double pram?”
I appreciate that baby wearing isn’t for everyone, but seriously… I had no idea people were still so ignorant that they weren’t aware of the benefits of it.

This was not the only comment I overheard – Another woman asked her friend (very loudly) if I thought I was a “Insert racist term here” as only people in Third world countries tie their kids to them. Yes, I was shocked by this. However, after seeing the benefits of carrying Sydney, I am shocked more people don’t carry their babies.

Baby Carrying is amazing for building the bond with your baby as they feel close to you, and in turn they become calm. It also allows you to get stuff done, and keeps your baby happy. I was literally trapped underneath Sydney 24/7 before we got the sling as she would not settle anywhere except on me. By using the sling, I was able to get stuff done around the house without upsetting her.

Had I known how easy and convenient it was, I would not have bothered buying such an expensive double pram so early on. As for the ignorant locals: They’ll have to get used to it – it’s much easier carrying one happy baby and pushing one happy baby than listening to two crying babies when they are both in the pushchair. (Sam cries whenever Sydney does).

Have you worn a sling? Which do you recommend?
We are currently using a Victoria Slinglady stretch cling.