We were recently sent a Kiddy City n Move stroller to review. The first thing that struck me when I unboxed it was the colour! I received the Lavender pushchair – it is MotherGeek Purple! HOORAY! 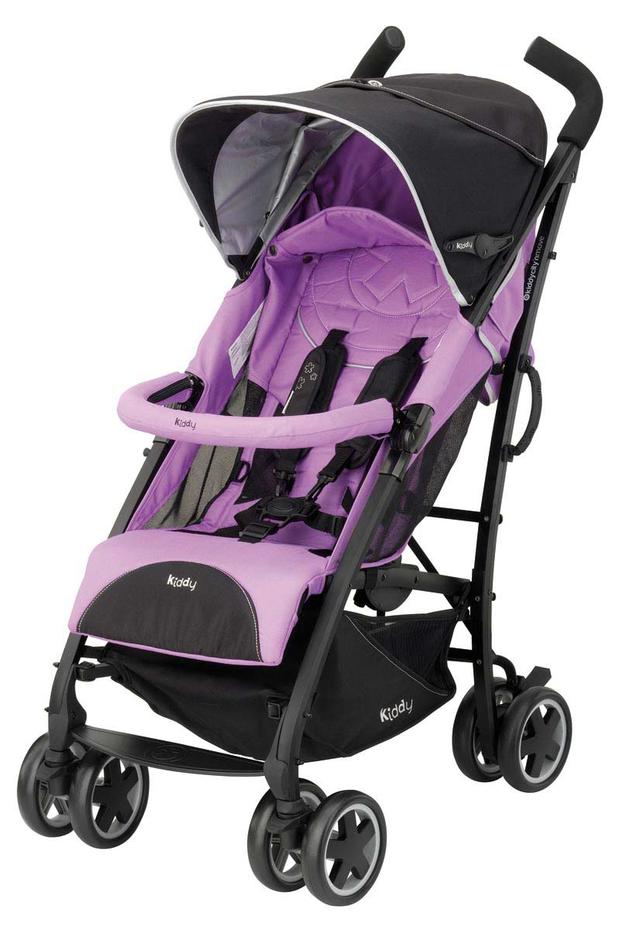 It was really easy to put the City n Move together. Literally 5 minutes and the pushchair was up and ready to go! Folding the City n Move is really simple. Unfolding it takes a bit of practice though. To unfold it, you have to release the clip on the side, hold the handle bars and push down on a lever on the back, with your foot. It was really stiff to begin with. It did get easier over time, but the first half a dozen uses began with me getting very hot and stressed out.

Also included in the box were adaptors to attach an infant car seat. (It can be used from newborn as a travel system, or 6m as a stroller). There is also a cup holder included! 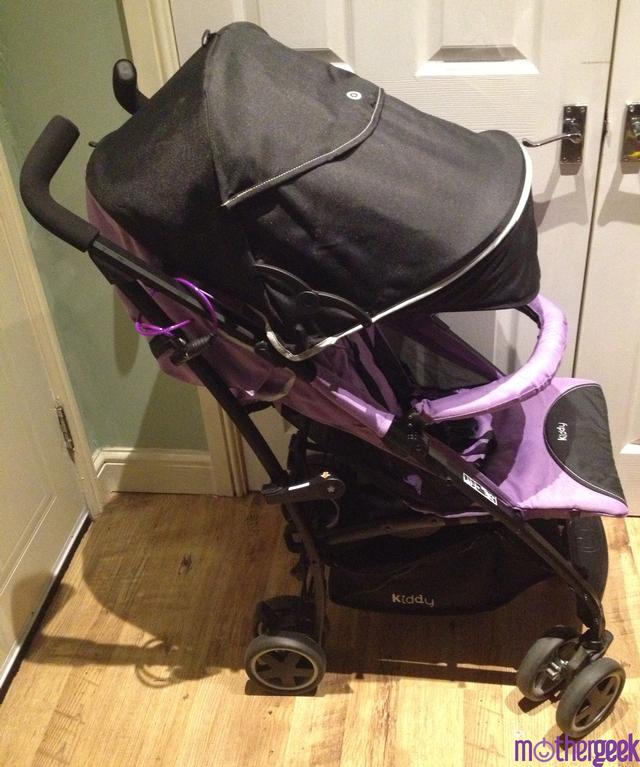 The peekaboo window on the hood is massive – you can definitely keep an eye (or two) on what your baby is up to. I love the size of the hood – in this hot weather, it has been brilliant! The extra sunshade flap hidden inside the hood was very well received with Sam.

The main thing I love about the City N Move is the size of the seat! Sam is only 25 Months old, but he is in age 4-5 clothes and weighs around 16kg. Technically, Sam is a bit too heavy for the City n Move, but he has LOTS of growing room in this stroller. He is too long for most pushchairs, and the straps won’t fit him. The City n Move is perfect for him, so I would recommend it for taller or older kids. 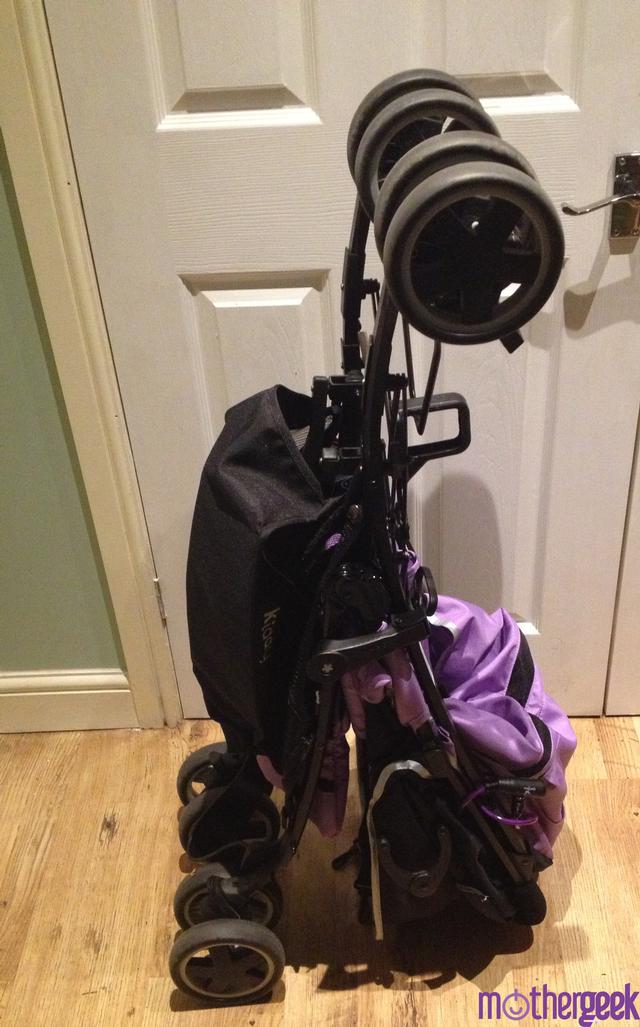 When the City n Move is folded, it is freestanding, but it takes up a lot of space. I drive a Vauxhall Insignia, and have had a double pram, a single stroller and a week’s worth of groceries in the boot before now. With the City n Move in there, I could only just fit another single and my handbag. There was no room for anything else. The folded, almost triangular shape takes up more space length and depth wise than both of my double pushchairs. It is narrower width wise though, so perfect if you plan on storing it in a cupboard. I love the fact it folds with the grab bar still in place. You need to remove this before folding on most strollers. 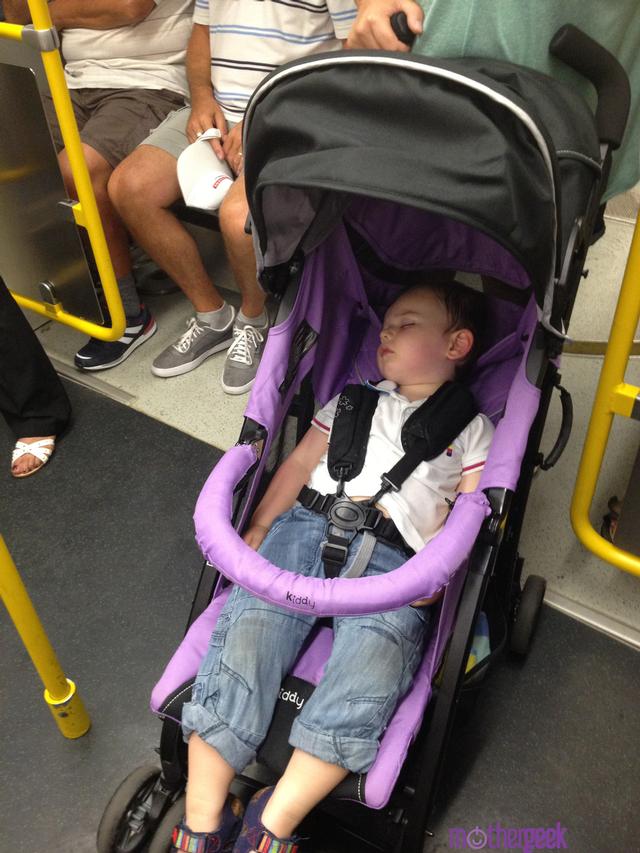 The seat is easy to recline. There is a small clip on the back of the seat, which you lift to release the seat down. It doesn’t recline totally flat, but is flat enough for a good nap! Sam has slept in it many times now! This photo shows him out for the count on the Tram heading into Manchester City Centre. The hood is only half down. When the hood was pushed fully downwards, Sam was hidden from his waist upwards!

The basket is a bit fiddly to get into, but the up side to this is nothing falls out of it! There are zips on the side to make it a bit easier to access, but it is still a bit of a pain.

The City N Move is easy to push. It handles well, and the brake works great. The wheels can be used in swivel or locked mode. It feels sturdy, and well made. The suspension makes it a smoother ride than a lot of other strollers.

One thing which struck me as odd was the fact
there was no raincover included with the City n Move. Being from England, this concerned me greatly! Granted – the hood is huge, but Sam’s legs are still open to the elements. I have checked online retailers and other reviews, and it seems you are meant to get a raincover included. I just appear to have received a dodgy box. I have contacted Kiddy to clarify, and will update the review in due course. 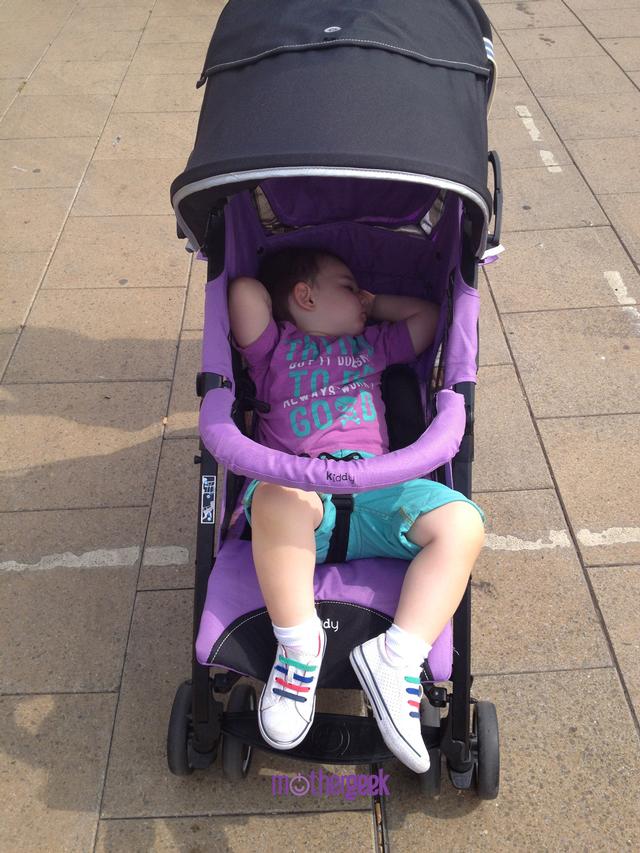 I love the fact you can undo the shoulder straps if you want to. For me, this is a big plus. Sam is tall, so the straps can get a bit tight when he is asleep. I like being able to leave the lap straps fastened, but unclipping the shoulder harness so he can relax – like in this photo!

The weather has been very hot recently, and Sam has been getting pretty sweaty when he has been in our double pram. The breathable mesh panels on the CityN Move have definitely kept him cooler. This has been a welcome feature in the heat, but I think it’ll mean a footmuff is essential, come Winter.

Sam is usually pretty good about going into his pushchair, but since he has been using the City n Move regularly, he doesn’t like the double any more. I think he has got used to the extra space!

There is a large pocket on the back of the hood. It comfortably holds my car keys, mobile phone and small purse. It would also just about hold a couple of nappies and a small pack of wipes. Perfect if you are popping to soft play or such like, and don’t want to take your bag with you. 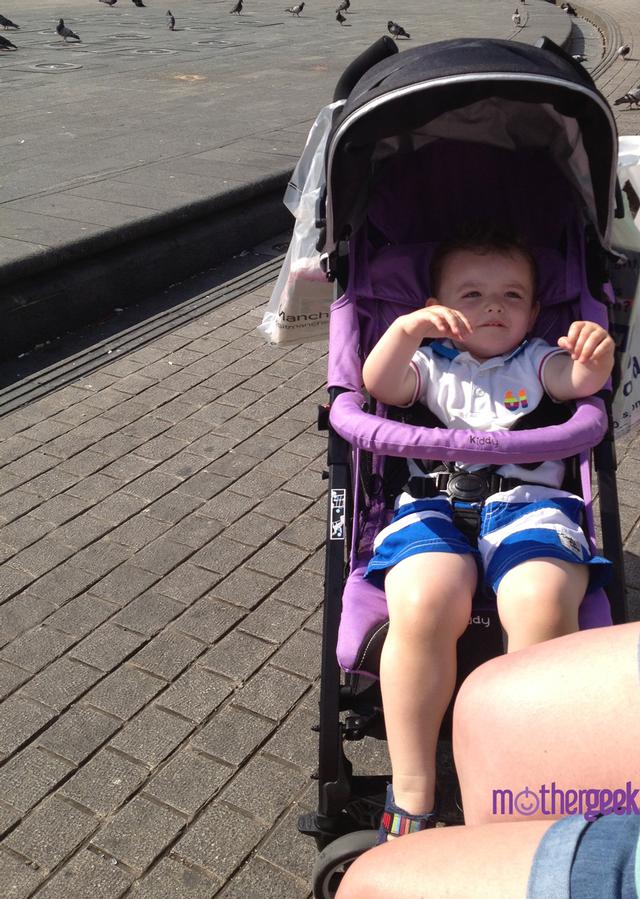 The upright position of the City nMove definitely passes the Sam test. He loves being so upright and being able to see what’s going on. Our double doesn’t sit up anywhere near this much. The leg rest is easy to adjust, and the height of the shoulder straps adjust easily too.

The Dimensions of the Citynmove are:

It is lighter than a lot of other strollers, but I found it difficult to carry when it was folded. It has one handle on the side, but I struggled to carry it one handed.

The City n Move is a bit of a love-hate affair for me. Sam clearly loves to sit in this, compared to his double. I love how comfy and happy he is in it. I love the fact it is freestanding, but I hate how much space it takes up when it’s folded. I love the fact I can pop a couple of bags on the handlebars, but I hate how difficult the basket is to access. I love that you can fold it with the grab bar in situ, I love the huge hood, I love the generous size of the seats and how easy it is to push. I hate the fact it takes up most of my boot, though! I adore the colour, and the breathable panels are genius! 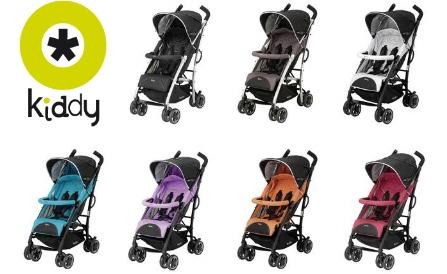 It has an RRP of £160, which I think is fair. The City N Move is
definitely better to look at than most standard strollers, and the
quirky colour options set it apart from the crowd.

All told, I would recommend the City N Move to people who have a large boot or those who don’t need to worry about fitting it in a car. I will be using it primarily to do the nursery run with. It’s small enough to leave there for them to use on outings etc, and light enough for me to push it home easily on days they won’t need it.

This is not a sponsored post. I was sent the Kiddy City n Move for review purposes, but all words and opinions are my own.