Like most parents to be, I spent many hours trying to find the “perfect” names for my children. I spent so much time searching through baby name books, websites and iPhone Apps that I swear I knew the top 100 names off by heart. We found out our first baby was a boy at my 20 weeks scan, and then spent many hours arguing about discussing potential boys names.

DaddyGeek wanted to call him Sebastian after his favourite F1 driver, Sebastian Vettel. I was dead against that. I kept changing my mind on boys names, but a few of the ones I liked were: Miles, Finn, Dexter and Sam. The only one of those Hubby liked was Sam.

We made the rookie mistake of telling people the name we had chosen, and got a few rude opinions from people. One of my sisters in particular expressed her dislike of the name, saying he’d be known as Fireman Sam. After spending 31 years being called Tina Turner, I can say, hand on heart I’d rather be compared to a fire fighter…!! 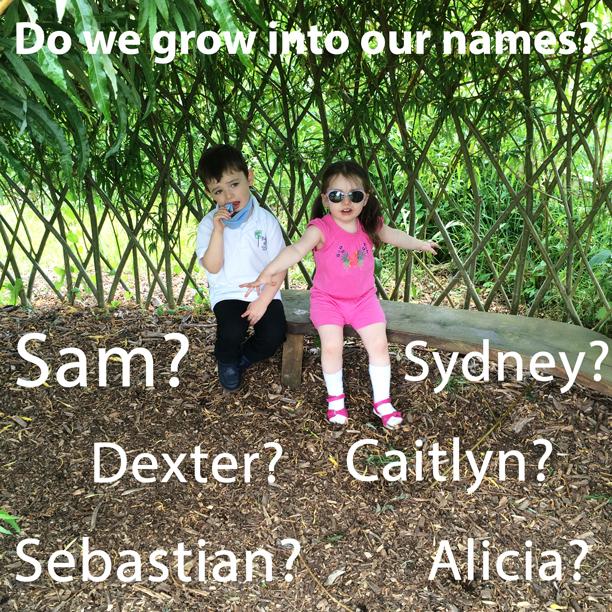 The second time around, we decided on the name Alicia when I was 20 weeks pregnant and found out we were team pink! We were watching Alias throughout my pregnancy, and one night I said (half joking) that I loved the name Sydney (The lead character’s name). Hubby said he did too and we should keep it as plan C!

A few days later, our baby arrived and when she was popped into my arms, I asked hubby whether he thought she looked like an Alicia, and he said he preferred plan C for her. So there she was…. the first ever Sydney our midwife had delivered.

People were surprised by our choice as Sydney is not a name you hear in the UK. Hubby assures me it is one of the most popular names in America though…!! My mum in particular took ages to get used to Syd’s name. She called her Disney for ages!

Someone said in passing the other day that Princess Charlotte didn’t look like a Charlotte to them, and this got me thinking… Do we grow into our names? I can’t imagine Sam as a Sebastian or a Dexter now, and the thought of Sydney being called Alicia makes me cringe. She is definitely a Sydney through and through. I wonder if the kids would be different if we’d decided to call them Caitlyn and Dexter…?

When I saw the baby name peace of mind tool this week, I thought about my name choices a little differently. This site shows you how successful people with each name have been. How many Nobel Prize Winners, How many Olympic medal winners, How many War Heroes, Authors, Artists, Billionaires and much more besides.

I found it really interesting that there have been no crime bosses, TV criminals or Sports Personalities called Sydney, but there has been a Nobel Prize Winner and 2 George Cross Winners. Sam is listed as being the name which belonged to 3 TV villains, 1 crime boss, 1 billionaire and 2 famous inventors…!!

I wonder how our generation of babies will affect these results…. I bet there will be a lot more Logans and Lolas on this list in 30 years’ time.