If you read my blog regularly, you’ll probably have noticed things have been really quiet around here for the past couple of months… You may have seen the post I wrote at the beginning of April, titled “My Mum“, which announced my Mum had passed away suddenly. Since then, blogging has definitely taken a back seat. Amongst other things, I’ve been busy emptying my late Mum’s house.

It was 3 weeks after she died before my mum’s funeral, as the Post Mortem delayed things massively. After the funeral, it dawned on me just how mammoth a task we had ahead of us sorting out my Mum’s estate. Her house was my Dad’s family home from 1954 onwards, and it is cram packed with memories and treasures spanning over 60 years. 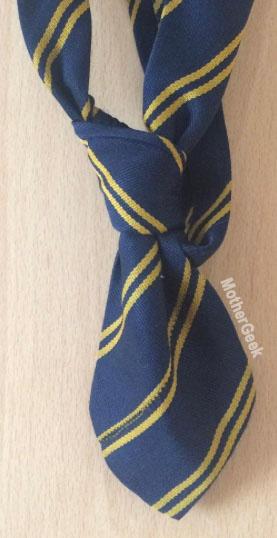 I am about half way through the sorting now, and I’ve already uncovered some amazing finds…. Above is my Secondary school tie. I bought it on my first day, back in 1995 and wore it every day until I left in 2000.

Random Fact: I used to wear it tied like it is in that photo! That’s how cool I was(n’t)! I found this while clearing out my old wardrobes.

I left home in 2008 and by the looks of my bedroom, my mum hadn’t moved anything I left behind. It was like some weird tomb in there. Firstly, the bin was still half full of paperwork I’d decided didn’t need to be saved. Additionally, old photo frames were still on the side, my bed was still made up and the wardrobe was still crammed to the rafters with clothes I didn’t bother taking with me when I left home.

Of course, the school tie was put in the “must keep” pile. The school may have been knocked down, rebuilt and renamed, but it’ll always be PHHS to me. 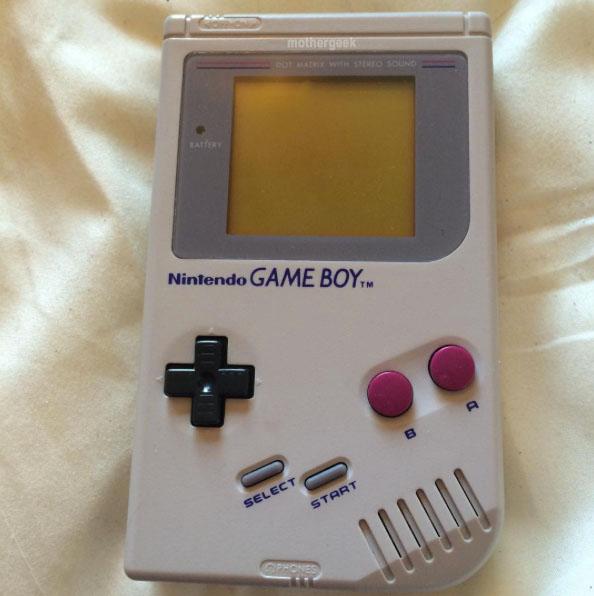 I remember saving up all of my birthday and Christmas money to buy this in 1995. Then being gutted when the Gameboy Colour was released shortly afterwards. It was hiding under my old bed in its carry case, complete with the Mario Bros game and Tetris. It still works, too!

The next I uncovered when emptying my late Mum’s house was… A large portion of my late Grandfather’s Stamp collection. There were literally thousands of stamps in large folders in my old bedroom. I’m assuming they were put in there to get them out of my mum’s way at some point. This is just one of the stamps I have unearthed and taken a shine to…! 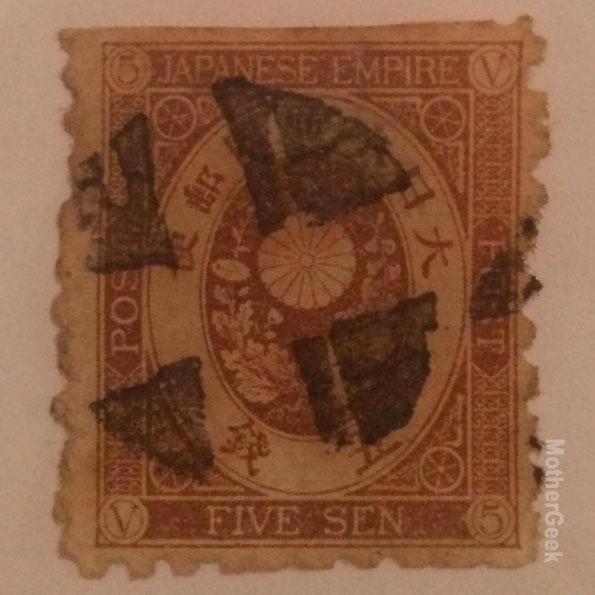 It’s from Japan and dates from around 1876. Can you see it’s got a pretty unusual franking stamp on there, too. Honestly, the collection is probably worth more in sentimental value than pounds. I have only found the non UK stamps to date, and as they are almost all franked, they are worth a few pence each, unless any really rare ones pop up. I haven’t unearthed any yet though. 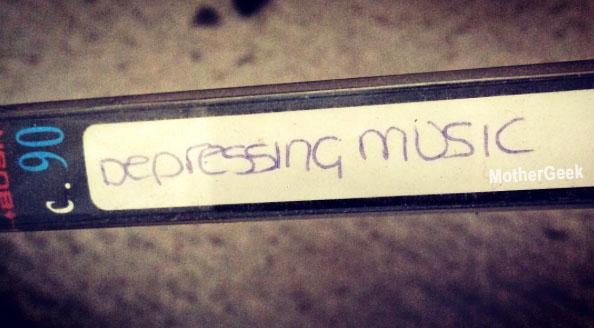 Surely I am not the only one who had mix tapes for all moods back in the 90’s? This one made me laugh out loud! I really must dig out a cassette player so I can see what  passed as depressing music to my teenage self…!! 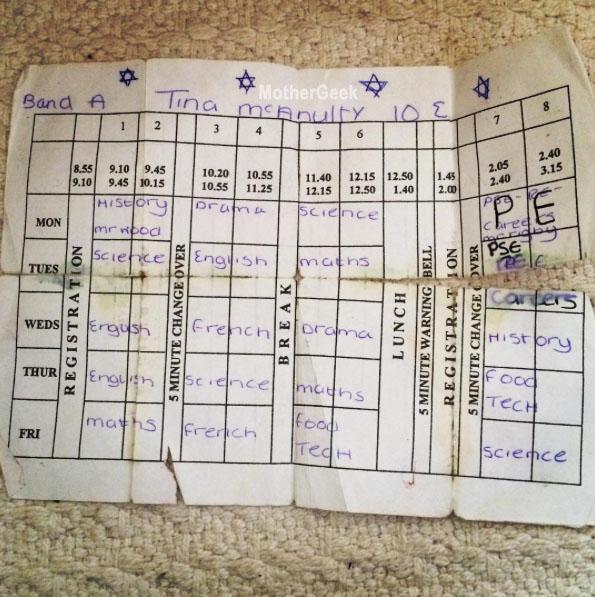 I stumbled upon my year 10 school timetable as well. Considering this lived in my school bag for a year, then in a box under my bed for 17 years, it’s looking pretty good! Thursday and Friday were definitely the worst days of the week in year 10! 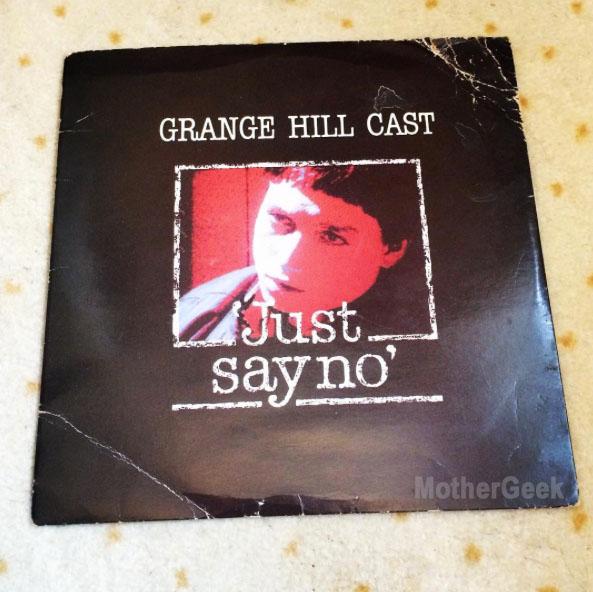 My dad’s record collection was amazing. I found it lurking in the spare room and was absolutely amazed to find this inside. My dad was born in 1952, so I doubt he bought this for himself. Something tells me this was my dad’s subtle way of brainwashing my older sisters into the dangers of drug abuse. I loved Zammo! (On the repeats on Sunday mornings in the 90’s of course – not the first time round… I’m not THAT old)!

Last but by no means least is something I wrote in 1996. It’s been sitting in my Nanna’s house for over 20 years… 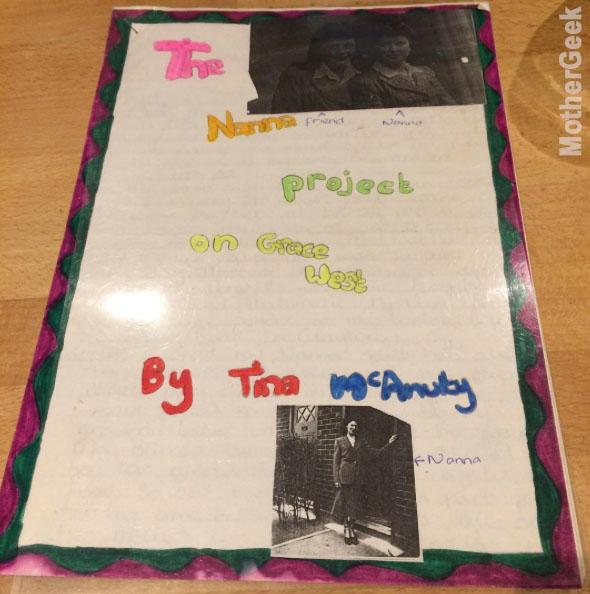 “The Nanna Project” was an assignment I was given in year 7 English. I had to interview an elderly relative about their life and present it in a document. I spent a weekend at my Nanna’s house and loved finding out first hand all about her life.

The project is packed full of stories from her childhood, the 2nd world war and her life as a wife and mother. I cried as I read it, both with happiness and my obvious page filling nonsense. Most of the document reads true, but I suspect my statement about her liking rave music may be a fib! (She was born in 1925, for goodness sake)!

It was definitely this project which triggered my love of history. I have always been fascinated with family history in particular and have traced my family tree back to the 1700’s. I’m going to put this project inside my family tree documents so future generations can read about my Nanna’s life too. Reading this and finding all of these items brought on lots of tears. Some happy, some sad. It’s been a huge grief trigger, but also a great memory trigger to boot.

I have unearthed plenty more treasure, and I am sure there’s more to come, but I’d better stop here for now. Once my mum’s house is cleared, I will hopefully be able to get back into blogging regularly. In the meantime, thanks for reading! 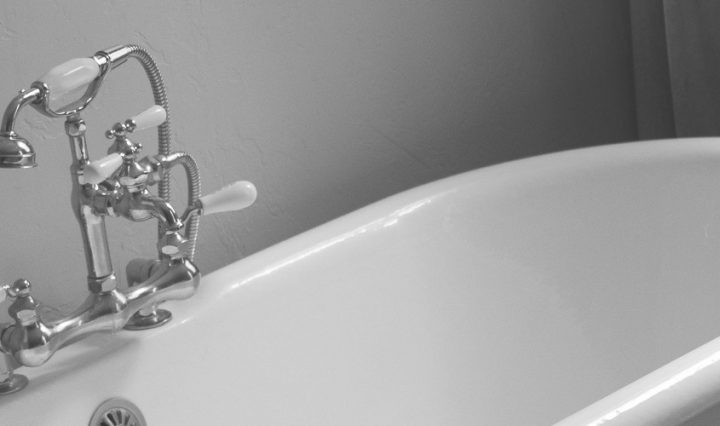 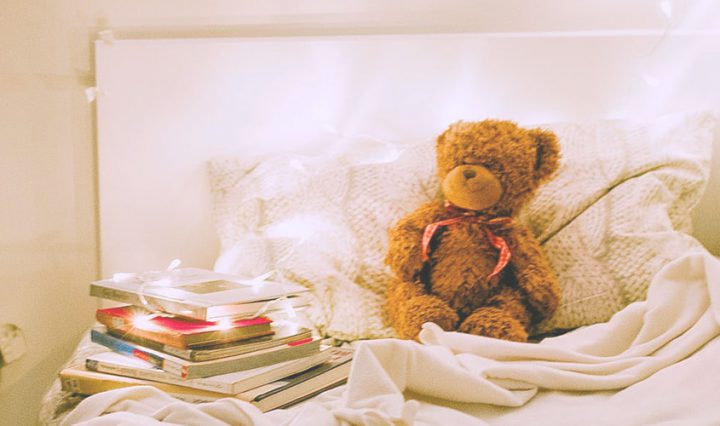