I was recently asked if I would like to review Hopster – a, “Safe, ad-free app full of TV shows and learning games for preschoolers”. Knowing how much Sam and Syd love the iPad, I accepted. I was given £10 iTunes credit to cover the cost of the full subscription. 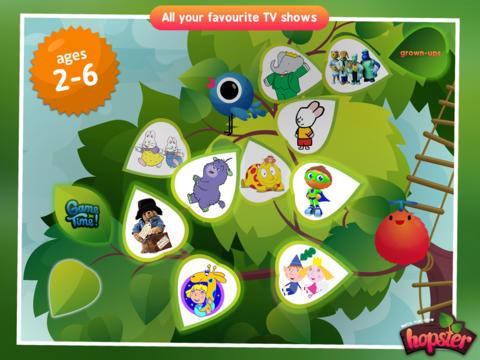 The app works differently to most others – you download the free version (which gives you access to several TV episodes and educational games). To upgrade to the full version, £5.99 per month is debited from your iTunes account.

In my opinion, the free version alone gets frustrating very quickly as the full version options are all there, but you get errors when you tap on them. I have to be honest – subscribing to a kids app was all new to me! It was really easy to do though (via the “grown-ups leaf” within the app). You can unsubscribe at any time too, via your iTunes account. (You can find instructions on how to cancel an in app subscription HERE).

Once you have access to the full version, there are literally hundreds of TV episodes to watch. These include Ben and Holly (Which Syd adores), 64 Zoo Lane, Babar and Paddington – amongst others. 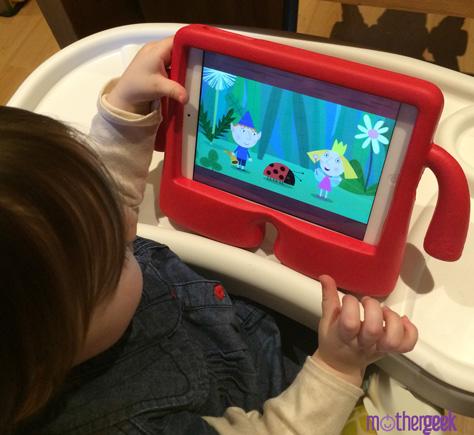 I loved the fact there are no in app purchase options – a definite plus for a children’s app. I also loved how easy to use the interface was – Syd was navigating between episodes of Ben and Holly within minutes! The app was great for entertaining Syd for 10 minutes here or there while I got some jobs done in rooms without TV’s.

To begin with, I thought the TV shows were all stored in-app, but when we took the iPad out and about, they wouldn’t play. This was a real shortfall in my opinion. Sam got very frustrated when the videos wouldn’t work without wifi. (His iPad doesn’t have 3G).

I noticed that when we were at home, Sam stopped playing his usual educational apps, and instead he was going straight into the videos and watching the 64 zoo lane intro over… and over… and over again, For this reason, I have now removed the app from his iPad. Sam wasn’t interested in any of the in-app games, so I can’t comment on those. I had a look myself, and they did seem educational but my children went straight to the familiar TV shows rather than the educational apps every time I put the app on.

It is worth noting that Sam has Autism, so my experience isn’t necessarily what most children would do. For us, Hopster isn’t worth paying £5.99 a month for. If the videos played in-app (without needing an internet connection), I would consider keeping it for when we are out and about, but as it is… it’s a bit pointless in my opinion. iPlayer, Demand 5 and ITV Player are all free, and all allow you to stream shows, plus iPlayer allows you to download them so you can watch them on the move. (There’s a huge cBeebies catalogue on there and it is updated daily)!

Sorry Hopster but I am not a big fan. There are better (free) services which allow you to stream tv shows when you have wifi, and plenty of educational apps too.