We decided to get the kids a wooden kitchen for Christmas. When I spotted the ELC Wooden Diner Kitchen had been reduced from £150 to £75, I snapped it up! I didn’t think anything more about it until Christmas Eve, when we set to work building it…

There were 80+ different screws (most of which had a cam as well). It was a total nightmare to build. I spent 2 hours trying to do it, and got nowhere. In the end hubby took over, and it took him over 4 hours to put it together. We managed to break several of the screws in the process. This meant that as no spares were included, we had to use our own screws – without cams on a few spots. The end result was well worth the stress of building it, though. This is how it looks without any additional accessories… 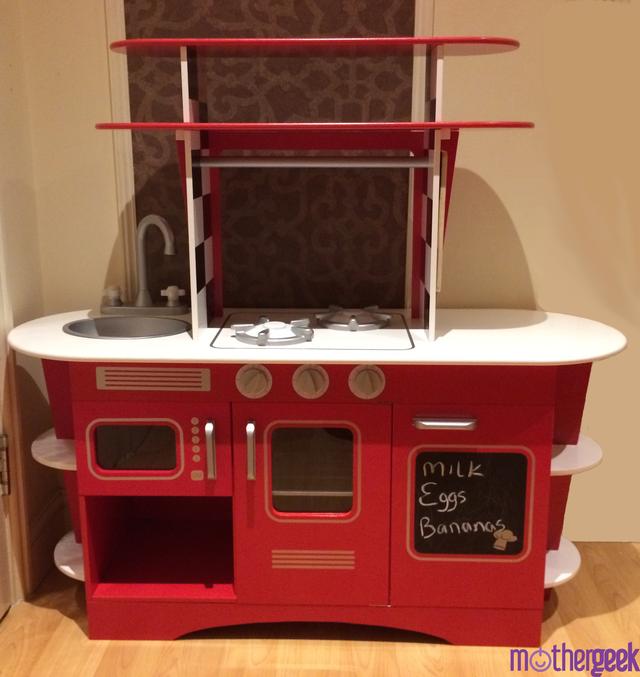 It is really sturdy, and the doors are all still firmly attached after 1 month of heavy use. They all close firmly, but Syd can open them easily at 18 Months old. The chalk board has been well used by both the kids and us adults. Sam loves to twiddle the hob dials, and they “click” as you do so, too.

Inside the oven is a removable shelf. It’s great for storing all the pans etc in here in between uses (we have also found the house phone in here a couple of times) – don’t say I didn’t warn you! The taps twist round and the spout moves as well – Syd loves to pretend to wash up her dishes in here. The included chopping board hangs on the right hand side in between uses.

I love the fact there is so much storage space with the Diner Kitchen. Syd has got loads of pans, plates etc, and a draining board. The draining board fits easily onto the upper shelves. She puts her cops and “glasses” on the side shelves, and her pans are stored in the oven. She has two wooden crates full of food, which easily fit onto the shelf on the bottom-left of the kitchen. Hooks are included to hang utensils from the pole above the oven, but we chose to leave these off as we knew Syd would get frustrated trying to use them. Syd has a toaster and a kettle which sit on the top shelf in between uses. She still has the microwave and the cupboard on the right of the kitchen to fill with accessories, too. 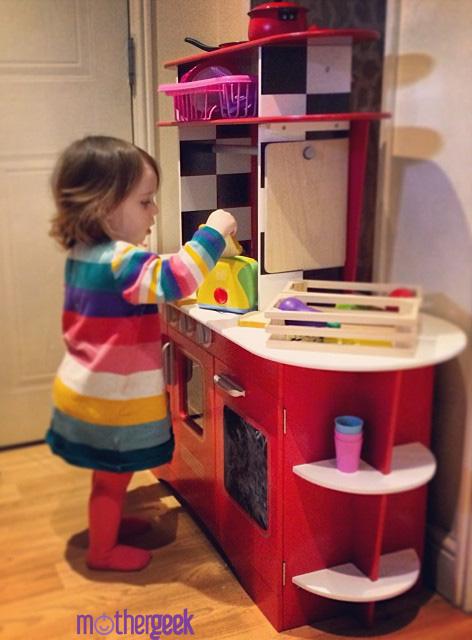 The kitchen diner is light enough to pull out for group play, and while there is no access to the oven etc from the rear, you can access the hobs, upper shelves and the worktop. There is easily space for two children to play together when it is pushed against a wall, and space for three kids once it is pulled out into the room. The ELC Diner is light enough to move on your own, but stable enough to prevent kids pushing it over.

Syd plays with the kitchen for hours on end. It is the first thing she plays with every day. Despite it being a nightmare to build, I fully recommend it. I’d definitely try to build it a few nights ahead of schedule though, as it was a long, stressful job. It still looks perfect, despite over a month of heavy use, and Sam clanking the tin pans around on it frequently.

I give the Diner Kitchen 4/5. I can’t give it 5 as the assembly was such a nightmare. Once it’s built, the kitchen is amazing though! I hope ELC start to include spare screws and cams in their flat pack kitchens soon – this would have made the job much easier.

This is not a sponsored post. I bought, I loved, I shared – simples!