You may recall I was chosen to become a Graco Ambassador. back in Spring. Part of my role involves reviewing products for them.

I was recently sent a Graco Logico S HP Infant Carseat to review.
It was set up for a newborn as soon as I removed it from the box. The padding was thick, and it was more spacious than my current carrier when I removed the newborn inserts. Sydney looked very comfortable when she was strapped in. 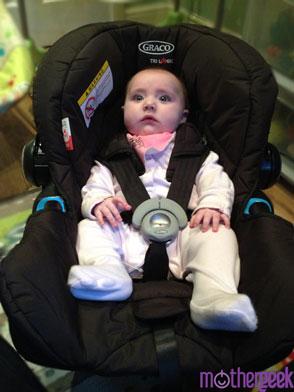 The carrier has a 5 point safety harness. I have only ever seen and used 3 point infant carriers until now. Sydney definitely felt more secure in this one, compared to out other carrier, which has a 3 point harness.I liked the fact it all clicked in at Sydney’s waist, rather than lower down, as is the case with 3 point harnesses. It was much easier to get to.

The harness can be altered to 1 of 3 different heights. I have to be honest, it is a fiddly job altering them. It involves lots of threading, etc. The good news is, it’s not something you have to do often, and it isn’t as bad as with some infant carriers I have used previously. The straps were easy to tighten and loosen, so it was quick and easy to get Sydney in and out of the seat.

The handle moves between the upright and the down position easily. You can use the carseat to rock your baby, or it will act as a seat if the handle is moved to the back position. The hood also moved smoothly and easily.

I thought the colour coded vehicle belt routing is genius. (It has blue guides, so you can clearly see where you’re meant to be threading the belt). This really speeds up the belt only installation. Once in place, the car seat is sturdy and Sydney slept happily enough when it was used. It was as easy as any other carseat to install and remove. 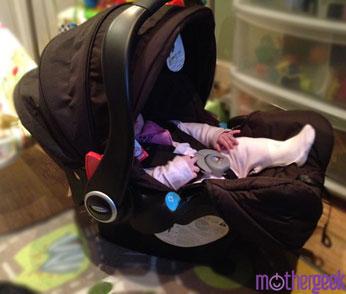 The overall look and style of the Logico S HP is very good. It looks modern, as well as safe.Speaking of safe, the car seat has Safety Surround Side Impact Protection, which will offer excellent protection to your baby in the event of side impact. It also has a 1 click system to correctly fit it to Graco pushchairs, turning them into travel systems.

It is rear facing, and suitable from birth until your baby reached 13kg. The Logico S HP measures approximately H58, W56, D67cm, and weighs around 4.4kg (lighter than many infant car seats). The cover is removable, and machine washable – a must have feature in my opinion!

All in all, I really like the Graco Logico S HP. With an RRP of £100, it is a good buy. I give it 5/5. It is definitely more padded and feels sturdier than cheaper infant carriers I have seen and used. The 5 point Harness and the colour coded belt guides are BRILLIANT features you don’t see on many infant carriers. These made up for the fiddly process of changing the harness height.

This is not a sponsored post. I was sent the car seat to review, but all thoughts and opinions are my own.