Sam and Sydney both love to play with Happyland toys. Sam has been carrying a Happyland Policeman around with him for almost 6 months now. When we received the Happyland Rose Cottage to review, I knew they’d both be excited! 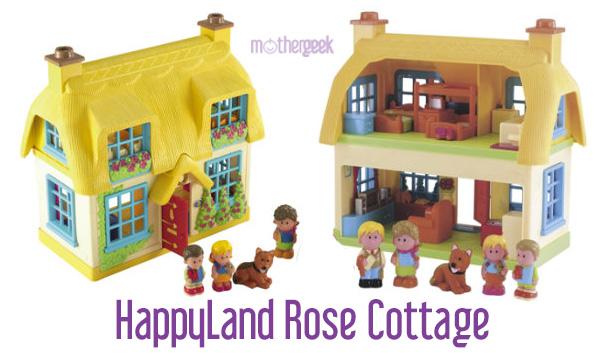 I have spent the past few months trying to find a “neutral” Doll’s house which was suitable for younger children. Rose Cottage definitely fits the bill! The cottage measures 31cm x 31cm x 19.5cm and requires 2x AA batteries (included). You also receive a Mr Barley, (Daddy), Mrs Barley (Mummy), Poppy (Daughter) and Charlie (Son) and the dog – who Syd seems to think is a Cat(!)

What Does The Happyland Rose Cottage Do?

The Happyland Rose Cottage features four sound effects. The doorbell “ding dong’s’, the telephone rings, the cooker makes kitchen noises and pressing the armchair makes the TV flash and play music. These sound effects are all very easy to activate. Sydney is 16 Months old and has no issue activating all 4 of them. The sounds are quite loud, and there’s no off switch or volume control. (I am an expert in tuning out noisy toys now, though so this didn’t bother me).

I shared a photo on Twitter of Sam playing with the cottage and one of my followers said: “We have that. I’ve been waiting for the batteries to run out for 2 years haha” – another plus in my book. I HATE replacing batteries!

What The Kids Thought

As soon as I opened the package, 29 Month old Sam picked up the cottage. He carried it round with him for 3 days, and wouldn’t let Syd near it! He spent ages pressing the doorbell and opening and closing the front door. Sam wasn’t too bothered about the people as such, but loved looking at all of the furniture. He likes to poke and peek through the windows, too. 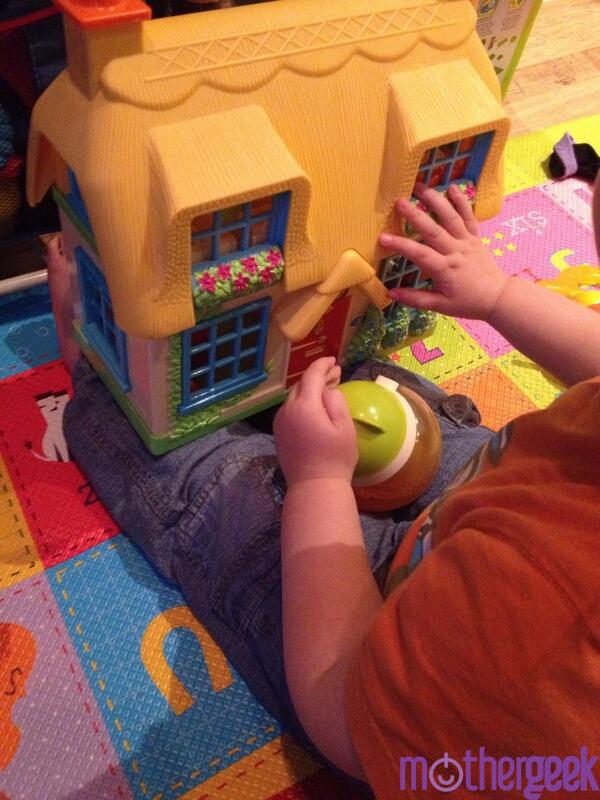 Sydney loves to play with the cottage while Sam is at nursery too. She loves to say “Na night dada” and put the Daddy figure to bed. She also loves it when I ring the doorbell and then push a figure through the door, making them fall over. “Uh Oh” is her favourite response to that game. Syd can activate all of the sounds herself, and loves to involve other toys in her games. We’ve had Peppa and George sleeping in the bunkbeds, Playmobil people in the bath and Mickey Mouse stuck in the door so far!

This sneaky video shows Syd dancing along to the tune the TV makes. You can also see the TV flashing. This sound is activated by pushing the armchair seat down – which you can see Syd doing in the video, too.

I love the fact the cottage is a neutral colour, so even fussy people can’t really say it’s just for girls. Sam adores the house and I want him to be able to play with any toy he chooses, regardless of what society think is acceptable for boys. There are eight thumbs up for the Happy Land Rose Cottage in our house! (Mine, Daddygeek’s, Sam’s & Syd’s)!

The house has already been tested for durability. It’s been thrown several times, Syd was actually trying to climb into it at one point last week, and the people have all been chomped on, thanks to poor Sydney’s teething. I am happy to report the cottage and all of the characters have survived!

The furniture, pictured above is all included. It is all fixed into place, so none of it can be lost. The front door opens and closes. It has been removed once in 8 days, but was fitted back on in seconds. All told, I love the cottage and cannot recommend it enough. It is beautiful to look at, and built to last. I’ve always been a happy land fan, and have already got the kids loads more, ready for Christmas!

I give the house 5/5 and would highly recommend it! Rose cottage has an RRP of £40, and is available from Early Learning Centre.