If you’re a regular reader of my blog, you probably know I am a huge advocate for allowing children access to technology. As LeapFrog Ambassadors, we were lucky enough to review the LeapPad3 and Leaped Platinum last year. When Leapfrog sent us the new LeapFrog Epic Tablet to review, I was very excited. The Leapfrog Epic has an RRP of £119.99 and is aimed at children aged 3+.

Rather than spending ages showing you what is included and how easy it is to set it up, I made this unboxing and demo video…

The first thing I want to mention is that this device does not take the games cartridges, so none of the games we have for our LeapPad 3 and Platinum can be used with the Epic. It does, however have an app store full of Leapfrog games which can be downloaded directly to the device, and they vary in price from around £4 each to £25, depending on the title and content

The Leapfrog Epic has 16GB of internal storage and accepts microSD cards unto 32GB. It is essentially an Android tablet, packed full of kid friendly software. It has a removable silicone bumper and an attached stylus. The screen display is really clear, and it responds reasonably well to both hands and the stylus. 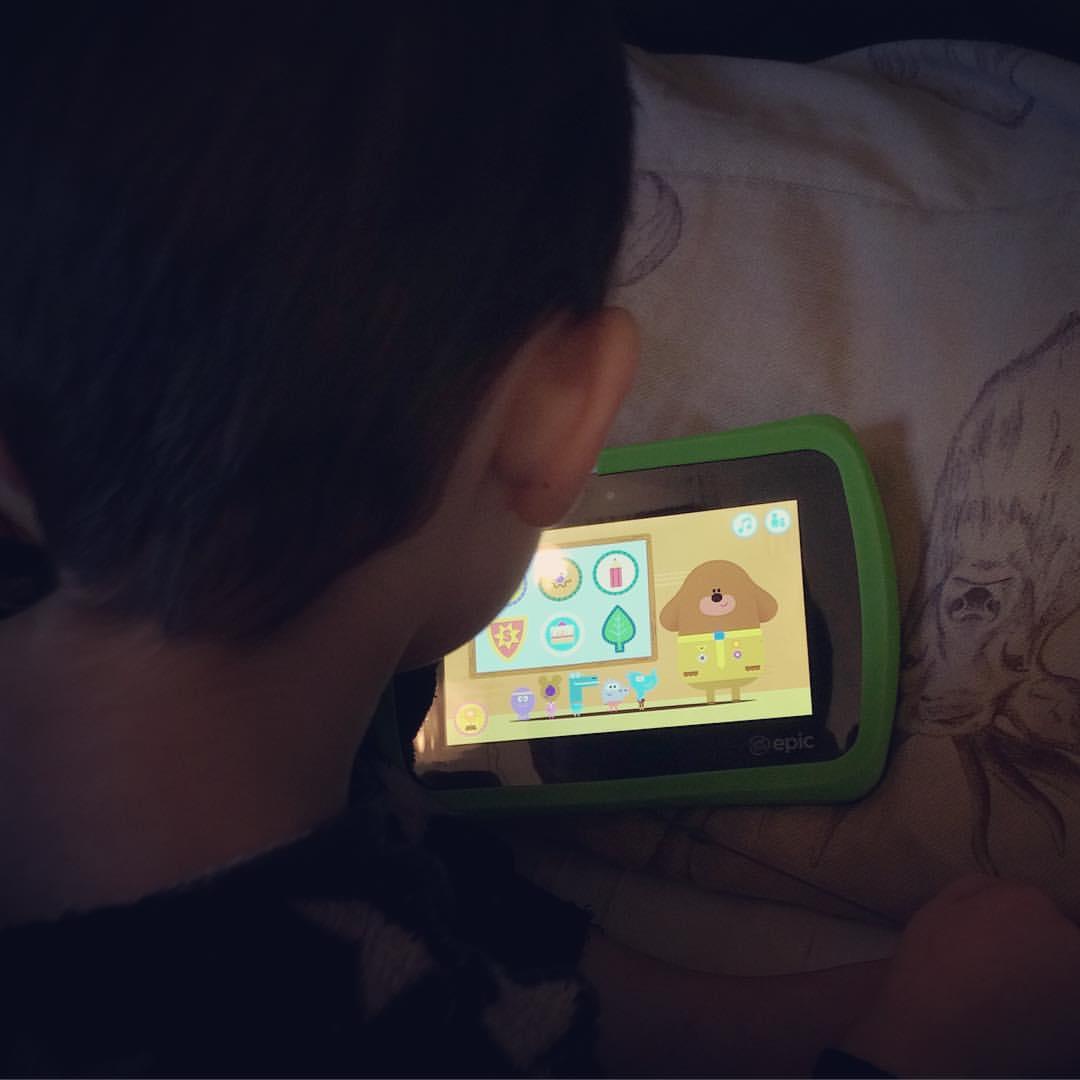 The Tablet is really easy to set up, and offline navigation is straight forward, once you master it. It’s not quite as user friendly as our iPad Mini, but I think a lot of that is down to the interactive home screen hiding most apps out of sight. Sam can’t move between apps, and needs a lot of help using this device. He’s 4 and has Autism. He uses his LeapPad Platinum and iPad Mini without support, though. That said, Sam loves the Hey Duggee app, which is only available on the Epic, so he does still play with it, despite his struggles with navigating the system. (This app cost £4 to download).

The LeapFrog Epic comes with over 20 apps included. The interactive Home Screen is a really nice touch for more able kids. Sydney loves the fact it shows the sun during the day, and the moon and darkness at night. The ability to customise the app layout was nice too – It’s never a good idea to have the app store on the home screen in my opinion!

Pre-installed apps include: Calendar, Camera, Photo editor, notepad, voice recorder and clock. The device also comes with 2 games: PetPadParty and Stretchy Monkey. You also get to choose one free game download from a list when you register your device. There are 3 new CBeebies apps available exclusively on the LeapFrog Epic Tablet – they cost £4 each.

The Hey Duggee one I mentioned earlier, but there’s also a Charlie and Lola, plus a Sarah and Duck one. We’ve got all 3 now, and the kids definitely like these the most out of everything on the Epic. 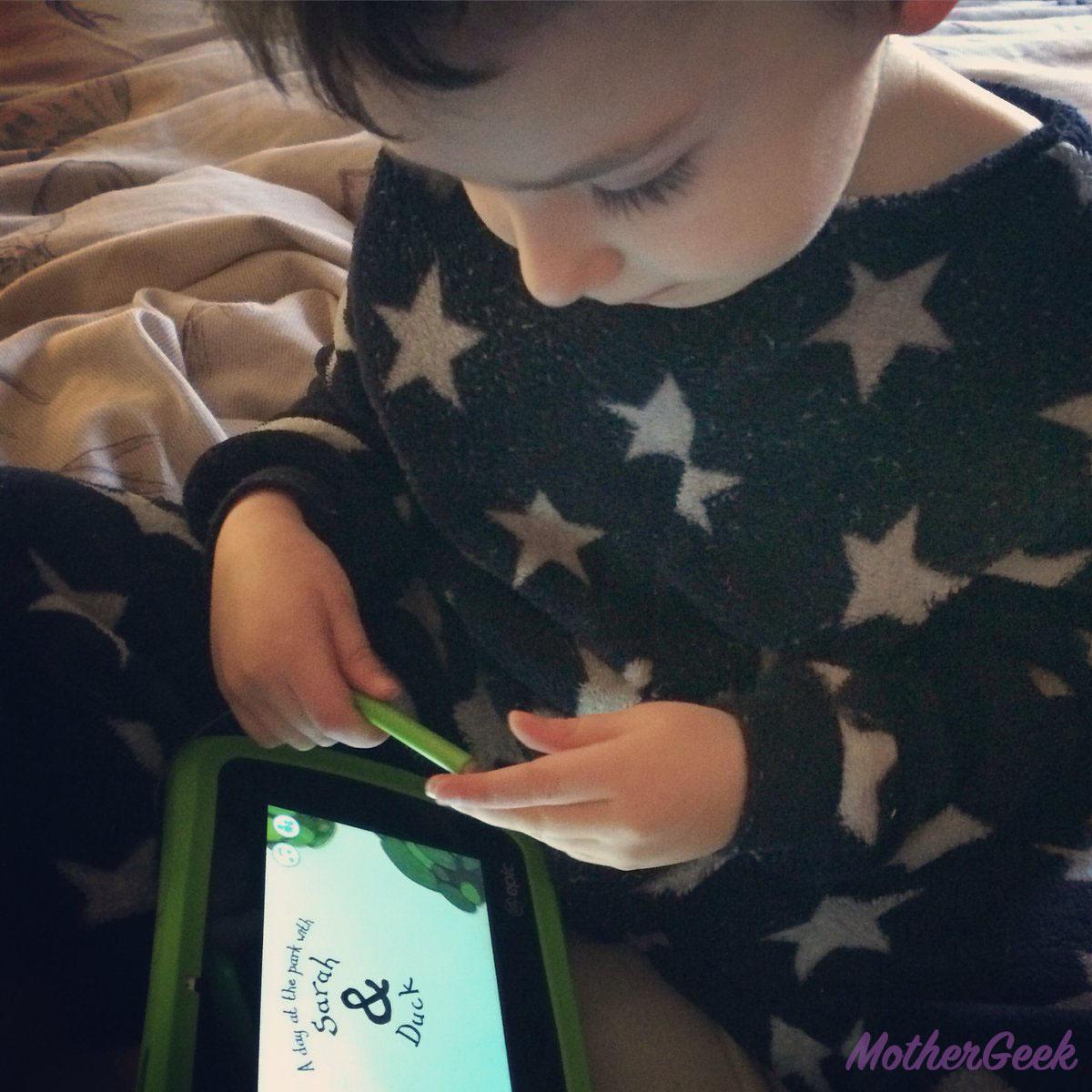 This LeapFrog Epic has a web browser, which allows children access to pre approved websites. It comes with the likes of Nick Junior, Disney Junior, Discovery Kids and many others pre-installed on it, and children can browse these sites freely, and watch content via them too. This is a lifesaver as you cannot download apps directly from Google Play, like you can with other Android Tablets, but I guess it’s the only way LeapFrog can be certain kids aren’t able to download anything inappropriate.

You can access the internet without any restrictions and use the browser like a “grown up” tablet from inside parental controls, but I tried adding 2 websites to the approved list, to allow the kids to access them, but neither worked. (Youtube and Disney Life). I followed the steps exactly how listed in the FAQ’s, but got no joy.

The Epic is a good way to get kids used to how tablets work, but I don’t think it is fast or smooth enough yet to be happily used as a standard tablet by children who have already used iPads or Android Tablets. My kids wouldn’t swap their iPads for the Epic until it has access to the Youtube Kids, Disney Life and CBeebies apps. Hopefully Leapfrog will allow access to the Google Play store soon, so that parents like me can get our own tablets back from our small people!

The LeapFrog apps are definitely the main selling point for me. The fact you know every app available to download in the LeapStore is child friendly is a huge plus. The apps feature loads of familiar characters too. Disney, CBeebies, Nick Junior and many more besides. I love the fact I don’t need to worry about in-app purchases, or annoying adverts. The kids seem to appreciate this as well.

Sam has thrown the Epic down the stairs on at least 3 occasions, and I am happy to tell you it passed the durability test with flying colours! Personally, I found the volume a bit on the loud side. There isn’t a volume limiter option, and my son likes it on full blast. There is a headphone jack, but my son won’t wear headphones or earphones.

The battery life on the Epic is much better than the iPad’s. This and the expandable memory are the two things the Epic outshines the iPad Mini with. I thought it would be interesting to show you the size difference between our 3 LeapFrog devices… 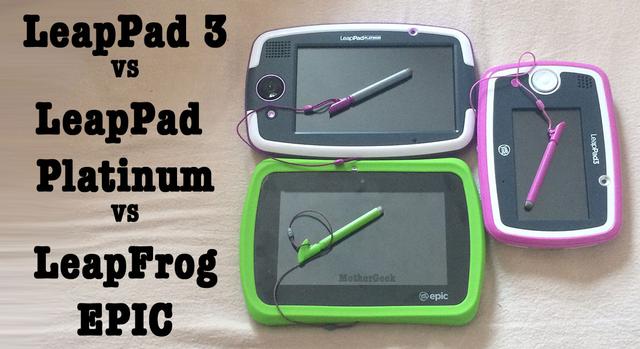 Out of our 3 devices, my children both play with the Platinum the most. The interactive screen on the Epic is a nice touch, but it makes finding the apps you want to play with a little harder than it is on the Platinum.

The Epic does have some apps which are not compatible with the older devices though, so if the new CBeebies apps are what your child wants to play, you’d have to go for the Epic.

Personally, I’d recommend the Platinum for children under 6, and the Epic for children aged 6+. The Platinum is easier to navigate, and the screen is more responsive to little fingers. You probably won’t have to remind older kids to turn the volume down quite as often either. (I hope)!

Finally, check out more of my reviews here.

This is not a sponsored post. I was sent the item to review but all words and opinions are my own.