We were recently sent a Leap Frog Learn to Write with Mr. Pencil™ to review. This item is aimed at children aged 3-6 years, so it was a little advanced for my two. Thankfully, I roped my friend’s 4 year old son (L) in to help me give it a thorough trial!

Learn to Write with Mr. Pencil™ is a thick stylus, which has an amazing iPad app to encourage children to write. (It is also compatible with iPhone and iPod touch, but you MUST have one of these devices to use it)! When I first unboxed Mr Pencil, I couldn’t help but notice there was a lot of excess packaging. Despite this, it was easy to get into the box, and to get the pencil out of the packaging.

Next, I downloaded the app to my iPad 1. (It is free from the app store, but you need to have Mr Pencil to unlock the full version of the app). It took about 10 minutes to install. Once this had been done, we went into the app. It asked us to place the “rubber” end of Mr Pencil into a circle 3 times to verify we had purchased Mr Pencil. Once we had done this, the app was fully accessible.

(L) spent a good 30 minutes exploring the app. He had to draw lines to begin with, which later evolved into letters. He kept smiling when he got “praised” for correctly drawing the lines. 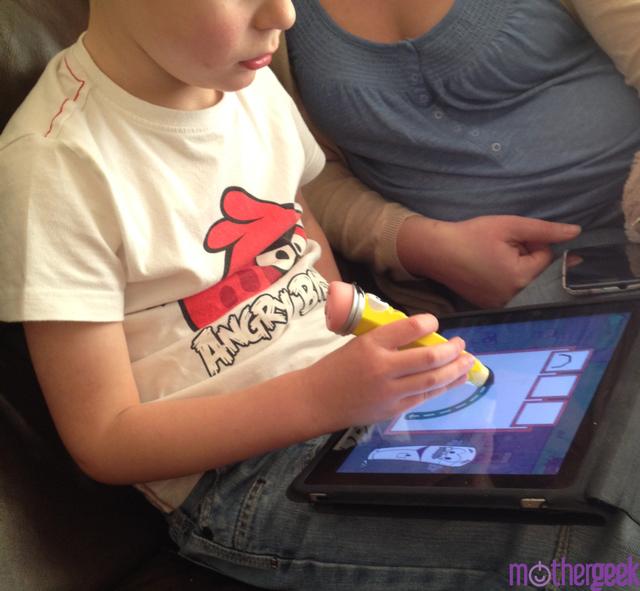 The challenges seemed to keep (L) motivated, but after a while, he did start to show signs of having an achy hand. I asked him if Mr Pencil was comfy to hold, and he said “It’s alright, but it’s a bit big”.

I have had a play on the app myself, and it starts with the basics when it comes to writing, and breaks down each letter into easy to manage pieces. The letter E, for example is broken down into four steps – one line each. I can imagine this makes harder letters seem less daunting. 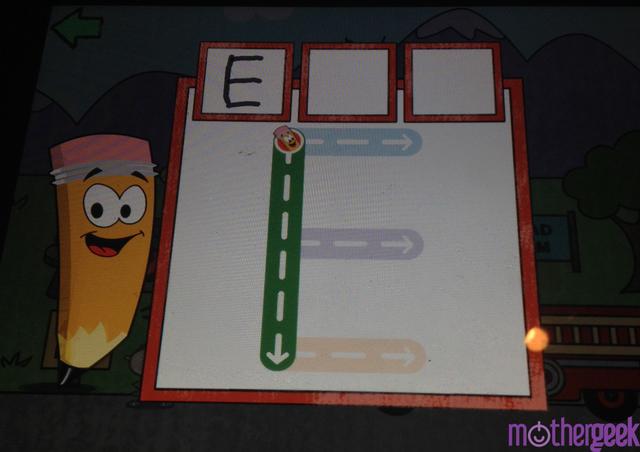 Mr Pencil is aimed at children aged 3-6 years. My son, Sam is only 2.5, but he has been playing the app using his finger, rather than holding Mr Pencil. I have to say, Mr Pencil is the most responsive iPad stylus I have used to date! I am very impressed with how well it works, and I have taken to using it myself, when browsing the iPad.

Lifespan wise, the app looks like it will take several hours to complete, and you can go back and redo levels you’ve already completed at any time. As you complete areas, new challenges open up. Each challenge has to be completed 3 times. This does get a little repetitive, but (L) didn’t seem to mind. Practice makes perfect, I guess!

All told, the app itself is brilliant. It’s well thought out and definitely a great tool to build children’s confidence in writing. Mr Pencil himself is a bit too big, though. He’s ok for getting small children to make “first marks” for example, but he is a bit too chunky for them to hold it correctly. Maybe making him the same size as one of the chunky pencils preschool children are encouraged to use would have been a good compromise?!

I do still like Mr Pencil, and I would recommend him to parents who’s children love playing on an iPad. Sam hates holding a pencil, but he adores his iPad, so I am sure that he will spend many happy hours playing with Mr Pencil once he is a bit older. I’d give Mr Pencil 4/5.

This video shows you how the app works. All the sound effects come from the app, not Mr Pencil…