When I was given the chance to review the BOB Revolution Pro single pushchair, I was beyond excited. If you’re a regular reader of my blog, you’ll know that I’ve been on a mission to lose weight recently. I hoped that the BOB would allow me to get even more active when out and about with the kids.

When it arrived, I couldn’t wait to get it unboxed and built. I made this video to show you exactly what’s included and how to put it together…

It took me around 10 minutes to unpack and build the pushchair. The first thing that struck me was the size of the wheels. They are HUGE! This of course means that BOB is amazing on uneven surfaces. I was also excited to see the single Revolution Pro had a handbrake. This makes slowing down on steep hills much easier! The handbrake is only intended to help you slow down though – you do still need to put the main foot brake on if you want to remain stationary. I was impressed at the size of the basket and the size of the hood – it’s huge! There is also a really large viewing window on there – great to have a sneaky peek at your child. 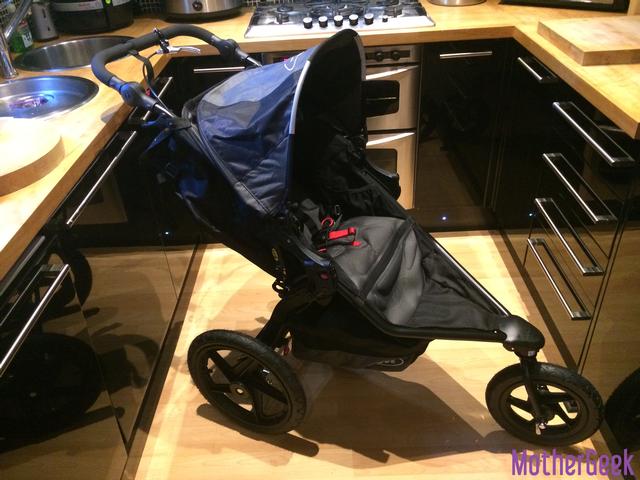 The pushchair is HUGE! These are the specs when it is set up…

These are the folded specs…

The BOB revolution Pro weighs in at 12.5kg. It can be used by children aged from 6 months to 17kg. Before you buy, I’d definitely check to make sure it fits in your boot! We have a Vauxhall Insignia, and the BOB fills well more than 2/3 of the space when the wheels are on. It’s not a 30 second job to reattach them, either – it took me a few minutes at the side of the road the one time I tried removing them to save space. 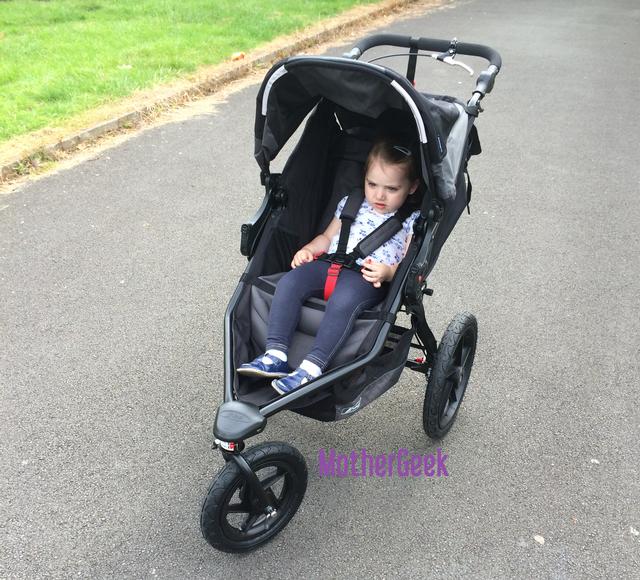 We have been using the Revolution Pro for a couple of months now, and it
has become a firm favourite with Syd. She loves going out in it as she
knows it means we are going somewhere fun. (I stick to the stroller when
going shopping as it is easier to navigate round shops than the BOB).

As mentioned earlier, the BOB Revolution Pro is suitable for children upto 17kg. Sam is 17kg now, and he is definitely getting too tall for it. He can’t have the hood back as the fabric is either behind his head and neck making him uncomfortable, or in his face. Luckily, Sam doesn’t mind the hood being forwards all the time, so he is still able to use the pushchair.

So… how does the BOB perform?

Honestly: It is by far the smoothest pushchair I have used. It climbs medium height kerbs almost automatically – you just push it forwards, and it mounts the kerb without you needing to tip the stroller backwards. This is a godsend if – like me you have weak wrists. I suspect the 16 inch pneumatic tyres and the amazing suspension are what helps so much! We use the BOB on the nursery run, which involves going through the park. The paths get quite muddy and uneven on wetter days, but the BOB manages with no issues. 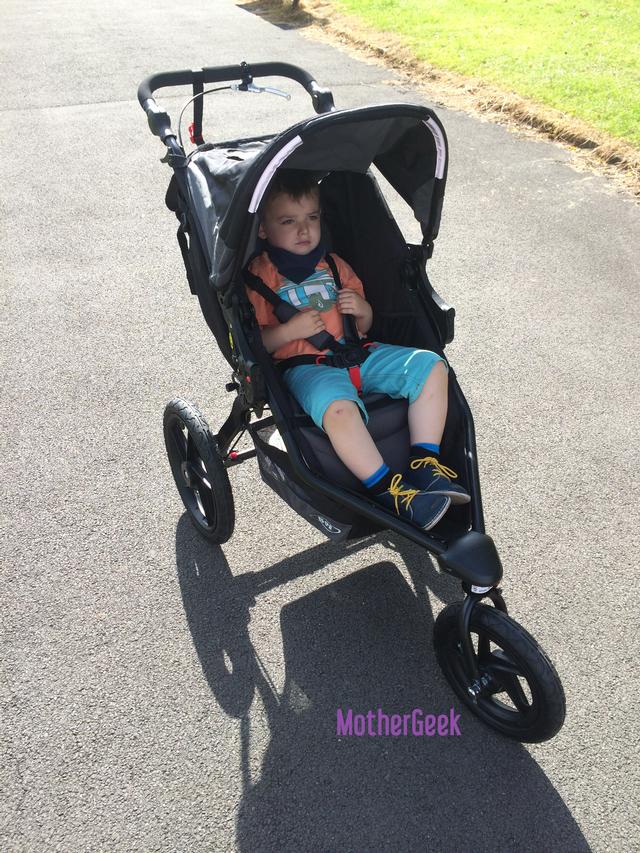 A few things I have noticed though are: It is really easy to switch between City and Sport mode – There’s a little red lever at the front of the pushchair which you just push to your desired setting. It’s literally a 2 second job. This makes it easy to combine a run with a leisurely walk in the park, or such like. I was surprised there was no rain cover included with the pushchair. I found it quite ironic that a stroller aimed at outdoorsy people wouldn’t include this as standard.

The adjustable handle means that both myself and my husband can push the stroller comfortably. It is really quick and easy to adjust the height, too. You just push in the buttons on the inner left and right of the handlebar, then push it to the desired location before letting go of the buttons. The pushchair is suitable for children aged 6 months and over. The seat lies back a fair amount, but doesn’t go flat. The seat won’t sit upright either, and the most upright position is about on par with the middle setting on most other pushchairs. If your child likes to sit fully upright, they probably won’t enjoy sitting in the BOB.

The harness is really well padded. There is a lower back support in situ, so you can be sure your child is having a safe and comfortable journey. The suspension on the Revolution Pro is amazing. Both of my children giggle and say “weeeee” when we are going over uneven surfaces, and they are bouncing around. 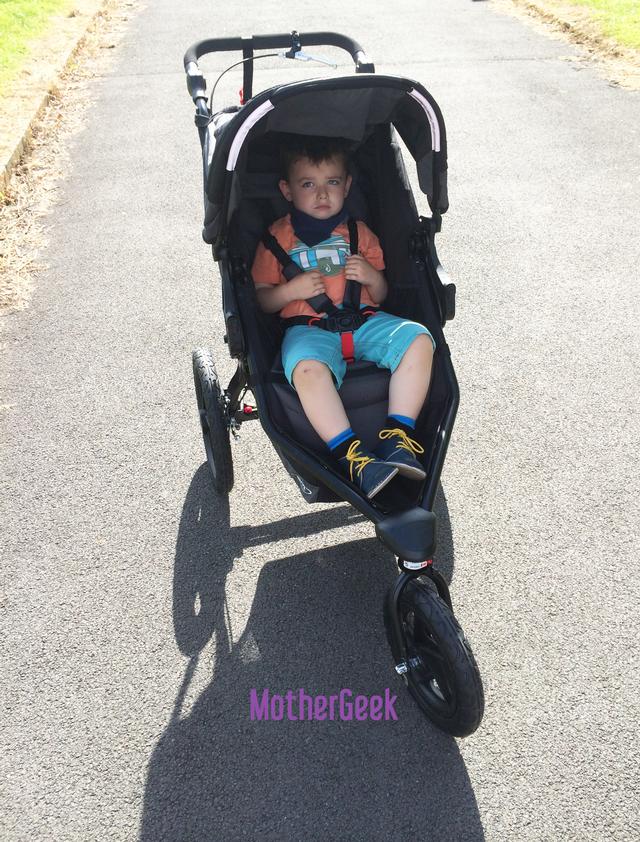 There is LOTS of storage space! The BOB Revolution Pro has 2 pockets inside the seat area (ideal for storing your child’s drink and a small toy, perhaps?) There is also a large pocket to the rear of the seat unit. This is great for popping your valuables into, so they are accessible but not restricting your movement by being in your pockets. There is also a really large basket underneath the pushchair, which can carry upto 4kg in weight. This means you can easily pop a changing mat, spare nappies, wipes, a couple of drinks, suncream or
even a small picnic in there. The pocket on the rear of the seat can carry up to 1kg in weight too – just right for my phone, purse and house keys!

We intended to take BOB on loads of outdoorsy adventures over the summer, but thanks to a combination of poor weather, my car boot being jammed shut and now my bad back, we haven’t been very far – YET! I will of course update this review once we have really put the BOB through its paces off road. 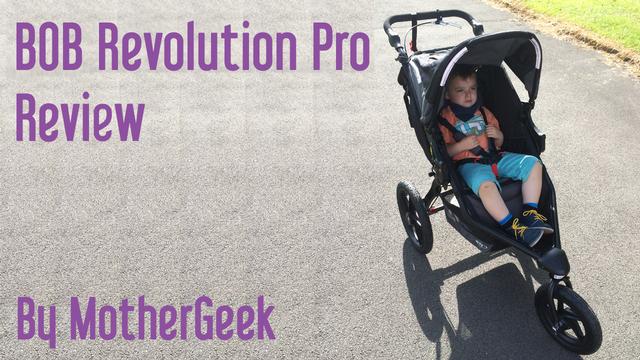 In the meantime… I give it 4/5. Knocking 1 mark off because it doesn’t include a rain cover and because the available headroom is lower than in most pushchairs.

This is not a sponsored post. I was sent the pushchair to review, but all words and opinions are my own.