As regular readers will know, back in March we took on our very own allotment. When Rocket Gardens offered to send us a small vegetable garden for review, the timing really couldn’t have been better – and as complete novices, it sounded perfect to get us on our way. Read on to see our Rocket Gardens Vegetable Garden review.

We were initially sent a voucher pack outlining what would be included with our Rocket Garden – you can then redeem this online, perfect if giving it as a gift.

You’re given a few days notice before despatch, and a final email the day before so you can plan ahead. Much is made of the importance of planting as soon as possible, so you really do need to be ‘ready to go’ when it arrives. We chose the date carefully when agreeing to do the Rocket Gardens Vegetable Garden review.

As DaddyGeek is the Allotment King, he unboxed, planted and nurtured the veggies, so I have left him in charge of writing this review….

Our delivery day coincided with a pre-arranged delivery of 4 tonnes of topsoil… So it was something of a rush to shift the soil into the raised beds before planting.

When the box arrives, again much is made of the importance of planting as soon as possible. Even advising the delivery driver to call his depot if there’s no-one in to take delivery!

Upon opening the box, you’re immediately presented with a lot of…. straw! Beneath this, each variety is in layers, though in our case they did seem to get mixed up a bit. 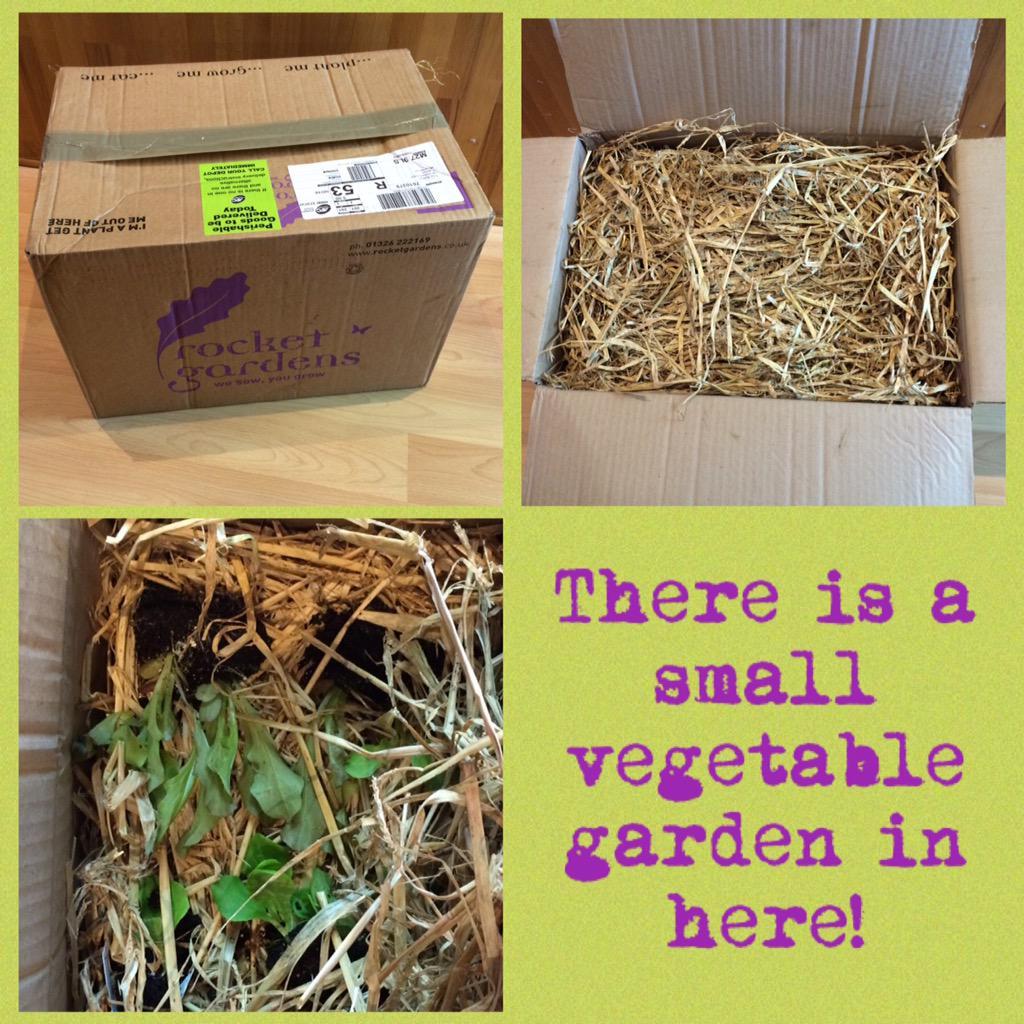 Unfortunately, some of them were either ‘dead on arrival’, or damaged trying to untangle them from the straw.  So, we didn’t get to plant the Kale, Cabbage or Courgettes. 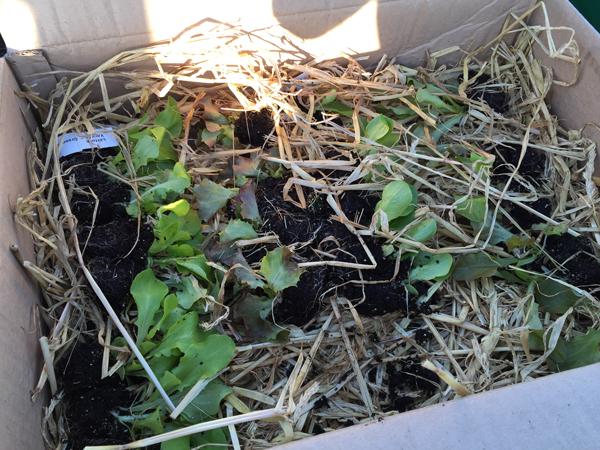 It was almost 7pm by the time I made it back to the allotment to start planting, so I was working against fading light to an extent, which didn’t make matters much easier.  Removing each layer as carefully as possible took a good 15 minutes, and still resulted in some damaged plants. 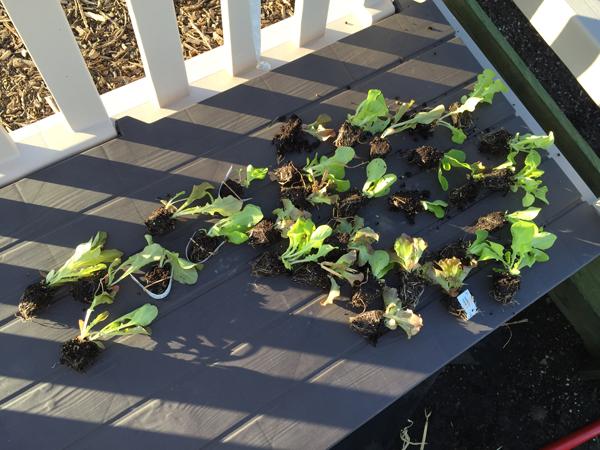 I removed and planted each layer in turn. In some instances soaking the roots in water for a minute before planting. (This supposedly helps ‘revive’ them, but as an aside it did also make them much easier to bed in).

Firstly, I took out the variety of lettuces. These were all in pretty good shape, and were easy enough to plant – a handy planting and care guide is included in the box, which details spacing etc.

I had prepared a row of 5 2sqm beds ready for our Rocket Garden – which, had all of our plants survived the trip, would have been perfect.

The lettuce variety, along with Rocket, were planted into one bed first.  Again, the rocket was in pretty good condition.

Secondly, I moved on to the runner beans, for which I had prepared a wigwam support.  These were around 8″ tall and quite tricky to untangle from the straw.

They were looking a little worse for wear, but not completely ‘dead’.  I gave the roots a good soak and planted alongside each support. Alongside these I planted the dwarf french green beans.

Next up, I planted the peas – again these seemed a little too advanced, and thus quite fragile – but generally they appeared healthy.  Peas are something we eat a lot of, so I’m quite keen for these to work. At the time of planting, I had prepared a number of bamboo canes with twine between them for support, but I have since added a cane alongside each plant to add more support. 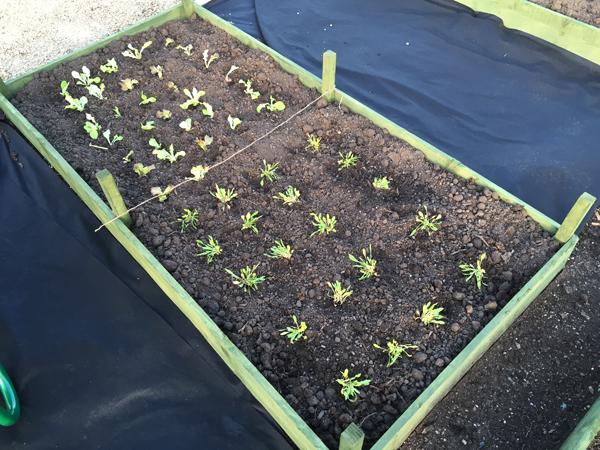 Alongside the peas, I planted the beetroot, which again looked in good shape.

Next came the carrots – now, everything I’ve read about growing carrots suggests that it’s foolish to do anything other than growing from seed directly into the ground.  The reason being that carrot roots are very fragile and any disturbance can cause them to ‘fork’.

These came with around 6″ of foliage, but the root itself was ‘contained’ in a pocket less than an inch long. There is supposedly a base to this which needs to be carefully removed before planting. Unfortunately, this happens to be the same colour as the soil, so doing this without disturbing the roots is somewhat tricky – and to be perfectly honest, I have no idea if I removed too much or too little.

At the other end of this bed we planted the giant red mustard – which again were looking healthy and were easy enough to plant.

The final task was to plant the potatoes – easily the easiest to plant, which was handy as by this point it was almost pitch black!

After 3 weeks, this is how our Rocket Garden is getting on; 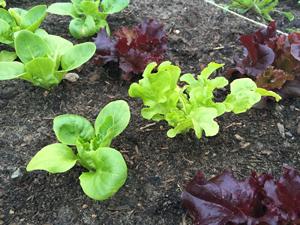 Firstly, the lettuce is looking healthy and growing nicely.  Rocket is also growing, but perhaps not as well as I would expect.

Additionally, the Potato plants have started to appear above the soil, so these have been ‘earthed up’ a few times already.

Half of the Runner beans have been lost so far, and I suspect the remaining won’t last much longer. Similar story with Dwarf French green beans, which unfortunately didn’t make it past day 3.

Additionally, half of the Pea plants are hanging on, but not a great deal of growth as yet. The remaining have gradually been lost. However, the order in which they have been lost makes me suspect this has been down to wind damage, rather than any issue with the plants themselves. 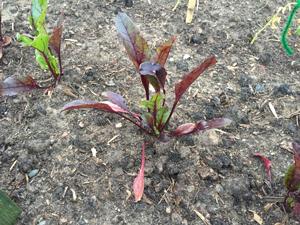 The Beetroot is growing very well as is nicely established, as is the giant red mustard. (I have no idea what we’re going to do with that yet, but I’ve been impressed with it’s growth!).

Finally, the carrots are ‘hanging on’, but again don’t seem to have grown a great deal since planting.

By far the most successful have been the plants that arrived relatively small (less than 2inches tall).  In my (novice) opinion, some were simply too far along to survive the trip and the unpacking.

It took me almost 4 hours to unpack and plant everything, and if I’m honest, towards the end it started to feel more like a chore than a pleasure – there was simply too much to do, with the added pressure of knowing it ‘had’ to be done. Perhaps if I’d been able to begin planting in the morning, this wouldn’t have been the case – though you are of course at the mercy of your delivery drivers route there! I think an early morning delivery slot would definitely have made things less stressful.

I also found the packaging somewhat frustrating – the straw was ‘everywhere’ – in between the stems of the plants, among the roots – and eventually, all over my plot (indeed, I’m still finding it now!).

Earlier today, before writing this review, I looked at the prices of each of these plants if bought from a reputable, independent garden centre (i.e – Not B&Q!) and the contents of this box came to £76 – almost twice the price of the Rocket Garden at £39.99, so it does work out cheaper than buying that way.  However, to counter that you obviously get to choose the plants yourself and plant them at your leisure.

Would I recommend it? For a city-dweller with limited access to a garden centre, someone who doesn’t have the time (or space) to grow from seed or someone with plenty of time that is able to spend the day planting out without being rushed, then yes – even accounting for any ‘dead arrivals’, it’s probably equally, if not more economical than buying independently.  For anyone that is more time-limited, or has easy access to a good garden centre – then no, the concept of ‘plant as soon as possible’ I think ruins the enjoyment of planting

This is not a sponsored post. We were sent the items to review, but all words and opinions are our own.

Finally, if the Rocket Gardens Vegetable Garden review has been useful, check out this allotment post.