As regular readers will know, back in March we took on our very own allotment opposite Bents Garden Centre.  I’ve posted before about some of our adventures on the plot, but as we’re now a few months in, I figured now would be a good time for Daddygeek to write a progress update. After much nagging…. He eventually did just that!

“We started out in March with this; 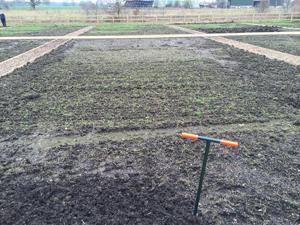 The plan at this stage was to ‘double dig’ – that is, dig out the first spade depth, and turn over the second spade depth – row by row.  This started quite well, having dug a fair bit within the first week. 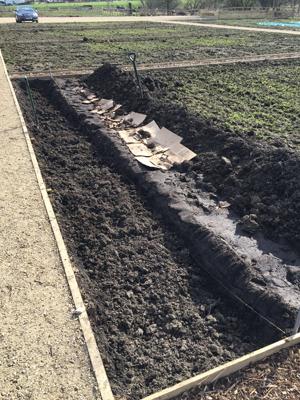 Then, we had rain – lots and lots of rain! I returned one afternoon to discover several large ‘moats’; 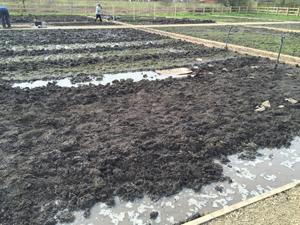 The ground itself is quite/very heavy clay in parts, and after waiting several days for the water to naturally drain away – eventually realising it wasn’t going to anytime soon – I had to decide to either tackle the problem, or grow rice! Now, I like rice – but not enough to grow 135sqm of it!

So, we needed a new plan! The first step was to deal with the ground, which I’ve been doing in ‘rows’. I’ve dug out the heaviest of the clay and replaced it with either topsoil or compost (or a mix of both, depending on what has been available).  We’ve had periods of heavy rain since I started this process, and it does seem to have done the trick – as of today, none of the ground pools water or gets ‘boggy’, but it’s been a very long and hard process.

The original plan was to segment the plot with different small areas, planting directly into the ground. However, after our little setback, I’ve now altered the plan – but in the long term it should serve us better. We will now have 25, 2sqm beds, a long 9sqm bed and a long 7.2sqm bed (plus no doubt a few containers and pots dotted around as time goes on!)

I started assembling the beds in mid-april; 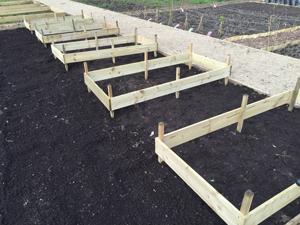 Each one assembled, positioned and then stained a ‘forest green’ colour.  The timber doesn’t actually ‘need’ to be stained as it arrives pre-treated, but I find the dull silver-grey colour that timbers turns to be quite depressing, so rather than wait for that to happen, I’ve stained them as I’ve built them.

Once in position, I loosen the ground below to one spade depth, removing any heavy clay or stones as I come across them; 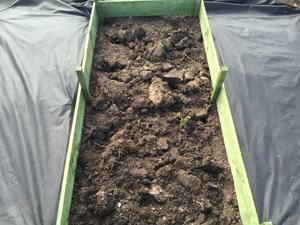 Each bed is 15cm above ground, but the soil has been ‘milled’ a further 20cm below, so we have a pretty good depth of fine soil in each.  You’ll also see that the supports on each bed go a little higher – that’s to allow the addition either of another level (making each one 1 foot high), or to support netting/cages.  The likelihood at this stage is that I’ll make the 10 beds either side of the plot double-height for root veg etc, leaving the ‘middle’ beds single height.

With 10 beds ‘ready’, I decided to buy in some topsoil – as a novice I really wanted to be sure that I couldn’t blame the soil for any failures. I bought 4 tonnes from a local farm, which arrived in 4, 1-tonne bags. Unfortunately for me, my plot is 20 meters from the car park – so my wheelbarrow had quite a workout shifting it all! 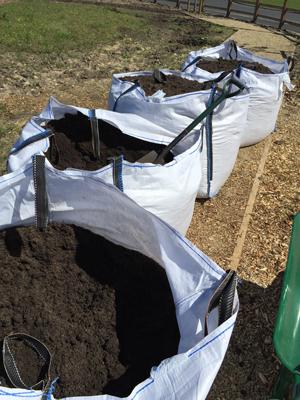 I’ve used a little over 2 tonnes filling the 10 beds currently built, so the remaining soil has been relocated to further down the plot ready for the next row of beds.  Of course, moving 4 tonnes of soil is no job for just one person, so I enlisted a little helper; 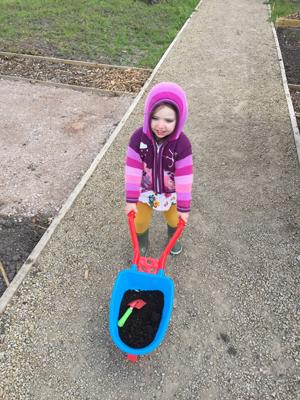 At the other end of the plot, we’ve added a bench and some temporary beds (‘experimental’).  The bench was desperately needed to store tools, as well as being a place to take a break. 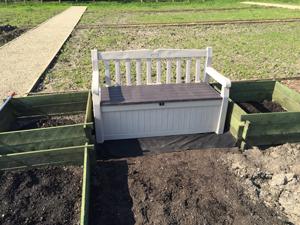 This week, our greenhouse *finally* arrived – though with a somewhat unusual base, and not the ‘upgraded’ one we asked for. Sydney doesn’t seem to mind though, and as someone that hates wind with a passion, she very much approves of her ‘grey house’ (“it’s not green, daddy – look! it’s grey!”)

This weekend, I *finally* finished preparing the ground – all 135sqm dug/turned over/milled/’de-bogged'(!); 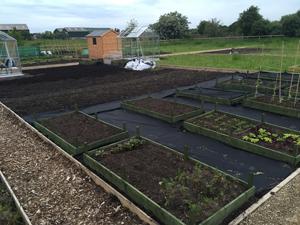 I’ve already added weed membrane alongside the two rows already in place, and more will be added as each row goes in – once they’re all in place, those will form paths which will be covered in bark – hopefully it will be a much more aesthetically pleasing plot by that point!  Beyond the 5 rows/25 beds, we’ll have a single, full-width bed that will both separate the ‘productive’ end of the plot, and hopefully add an element of windbreak. We’ll do the same at the very bottom of the plot, with the little area between (where the bench currently is) being both a ‘relaxation’ area, as well as the part we’ll use for things like flowers.  On paper, this arrangement allows us a small ‘lawn’ area, yet only ‘sacrifices’ a 1m wide area.

However, we have a long way to go before we get there – 15 more beds to buy and build, loads of timber to order, a greenhouse to fit, more soil to add, lots of bark to lay….and so on.

Whilst we do have some things planted, and a few more things to add to the currently ‘ready’ beds, this year is mostly going to be about getting the framework and structure in place – so that next year we only have to concentrate on growing!”

MotherGeek here again now…. I just wanted to add that while I haven’t done much digging myself, I have enjoyed lots of peace and quiet when Syd has joined her Daddy at the allotment. I have also shared some of the progress via Twitter, using the #BentsAllotment hashtag. I have found 2 other Twitter users who have allotments where we do, and one of them is a blogger, too! Why not check out Our Little Allotment if you want to read more allotment adventures.