Last weekend, Sam and I attended a “Babes in the wood” taster session with We Are Adventurers – This is a class for under 5’s to enjoy the great outdoors!

We all met up at Chorlton Water Park, and we were given our first task -a leaf hunt! We were all given a sheet which showed images of lots of different types of leaves we could see as we walked along the paths. 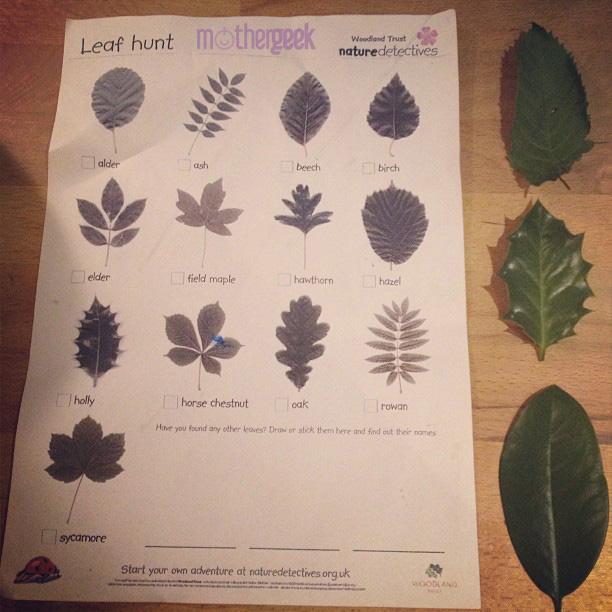 Paul (The group leader) was brilliant at pointing out some of the leaves as we walked round. He picked leaves off, and passed them to the younger children. He pointed some out to the older ones, and asked them if they could find the leaf on the sheet. I learnt a LOT from that activity, and have kept the sheet to reuse it in the future.

Sam spent ages flapping one of the large leaves in his face, as he was pushed along the path in his pram. In case you’re not a regular reader of my blog, I should point out that Sam is 26 months old, non verbal and suspected autistic. He loves being outdoors. We found about 7 different types of leaves as we walked from the car park down to where the rest of our activities were taking place.

In a clearing just to the right of the path, several different activities were set out. The first activity was painting the leaves we had just collected. Sam isn’t one for painting, though so he wasn’t interested in this activity. He walked over to the large sheet which was tied up between the trees, like a sail on a ship. This activity was…. 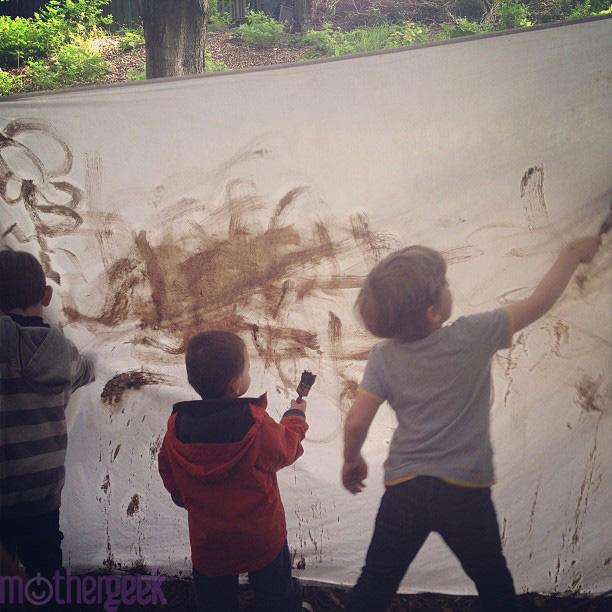 Painting with mud! I have to be honest, I expected Sam to run a mile when I showed him the muddy paint brushes, but he took to this activity well. He was happily sloshing mud over the sheet for ages, with me and one of the helpers looking on in awe! After a while, some of the other children joined in, and Sam continued to paint happily! He didn’t even get upset when he walked into another child’s muddy paint brush and ended up with a face full of mud! (Sam usually hates being dirty, so this was a huge deal for me)!

Sam spent a lot of time walking around, picking up stones and pebbles, admiring the trees, listening to the birds, and playing in the woods. He had an amazing time!

While Sam was doing the above, some of the other children were enjoying climbing the small, rocky wall, making mud pies in the mud kitchen, collecting insects, using cookie cutters to make pictures in the mud, and hiding underneath the bridge (The stream was dry, so they played Three Billy Goat’s Gruff)!

Sam went back to the leaves the other kids had painted earlier on, and spent a while staring at them. He then saw that the sheet was almost covered with mud, and looked horrified! I’d love to know what he was really thinking – the look on his face at the time was brilliant! 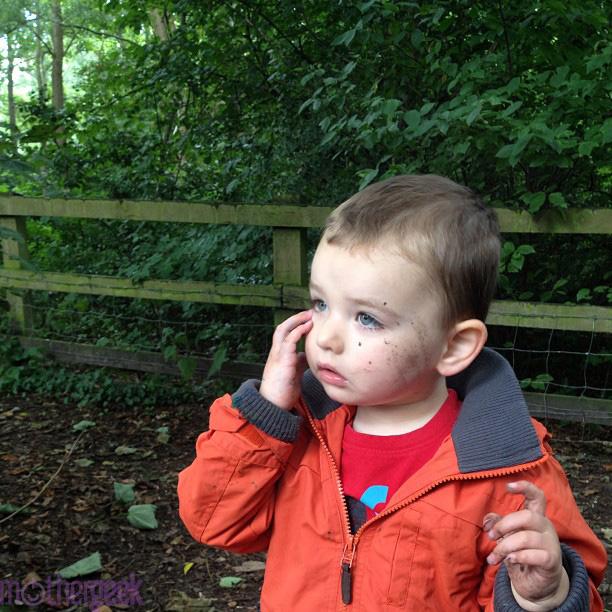 Sam fell over in the mud towards the end of the session, and got a bit upset. While I was calming Sam down, Mark poured everyone a Hot Chocolate from his flask, and all the kids looked amazed by this! Sam was too upset to have any, but it looked delicious, and perfect to warm up with on a crisp Autumn morning.

Sam really enjoyed the session, and got a lot out of it. He is usually very restless and agitated, but he wasn’t like that during the session, or for the rest of the day. We actually took him to the woods ourselves the next day, as he’d been so well behaved the day before. I guess Sam really is an outdoors kid!

I had a brilliant time at the session too, and would love to sign Sam up to attend every week. (The cost of the Babes in the Wood class is £36 for a 6 week block). Unfortunately, the under 5’s sessions only run on Tuesday and Friday mornings at the moment, and Sam is at nursery then. If they start up a weekend class for under 5’s, I will definitely be signing Sam up, though! Or an afternoon session in North Manchester/ Salford/ Bolton so we could get there after nursery.

I would highly recommend the class for children aged 2 and over. The terrain is a bit uneven, but I managed it with our pushchair, and there’s lots of room to leave your pushchair (and baby if you have a younger child) within easy reach. Sam did the class in his old trainers and jeans. He did get a bit muddy, but nowhere near as much as I was expecting. The class goes on no matter what the weather, so I’d buy wellies and a waterproof coat if you’re going to sign up your little one!

They have classes for children aged 2-12, as well as after school sessions, School Holiday clubs and they do parties, too. We call Sam Batman, so the superhero party may well be on the to do list for him, soon!

This is not a sponsored post. We attended the class, we loved it, I’m sharing my thoughts. Simples.