If you read my blog regularly, you’ll already know I’m a huge Batman fan. So when I was asked to do a Batman 3 in 1 Batcave Review, I was happy to agree. So read on to find out how I got on when it came to assembly. As well as my thoughts on the toy as a whole.

The Batman 3 in 1 Batcave is made by Spinmaster and suitable for children aged 4 and over. It has an RRP of £49.99 and the toy requires 3x AAA batteries for the Bat Signal and computer screens to light up. The batteries don’t do anything else, so they aren’t essential, in my opinion.

Building The 3 in 1 Batcave

Rather than spending ages explaining how tricky it was to assemble, I made this video, so you can see for yourself.

It was definitely a challenge in parts, as the instructions aren’t very clear. I got there eventually though – with a lot of patience. Once the Batman 3 in 1 Batcave is built, the structure feels sturdy. I love the different sides of the set.

It’s brilliant that kids can play in both the batcave and a run down area of Gotham City. When you’re on the “Bat Cave” side, you have the cave entrance on the ground floor. You also have Batman’s lair on the middle floor, complete with jail, changing station and armour wall. Then finally, on the top floor, you’ll find Bruce Wayne’s computer system, which allows him to monitor Gotham City. There’s a button here, which you press to illuminate the monitors. 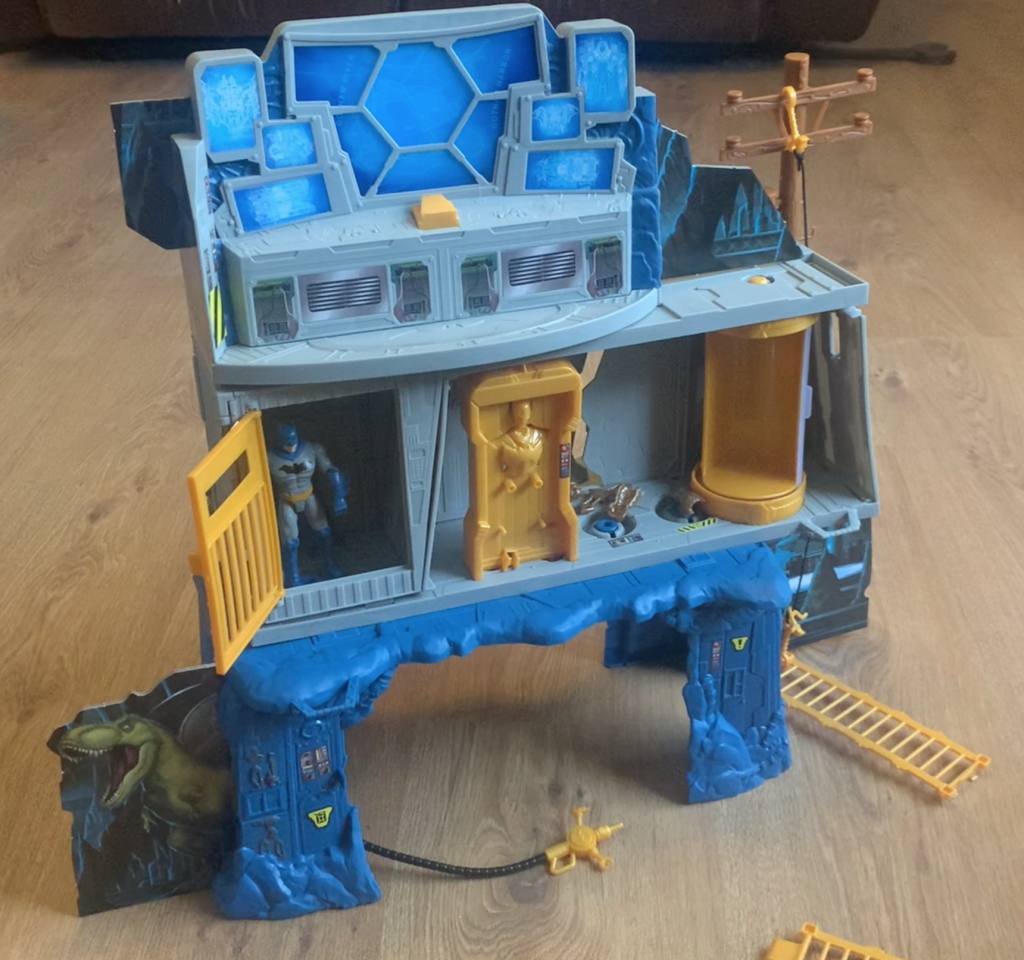 When you spin the play set around, you’re transported to a less desirable area of Gotham City. It seems to be an alley way similar to the one Bruce Wayne’s parents lost their lives. There’s graffiti, a dumpster and also boarded up windows. If you look to the top, you’ll see the rooftop where Police Commissioner Gorden fires up the Bat-Signal. Press the yellow button and you’ll light up the room at home!

The launch and defend batmobile which is available separately fits inside the bottom section of the Batcave. (Pictured below). I love that the two playsets can be used together in this way. 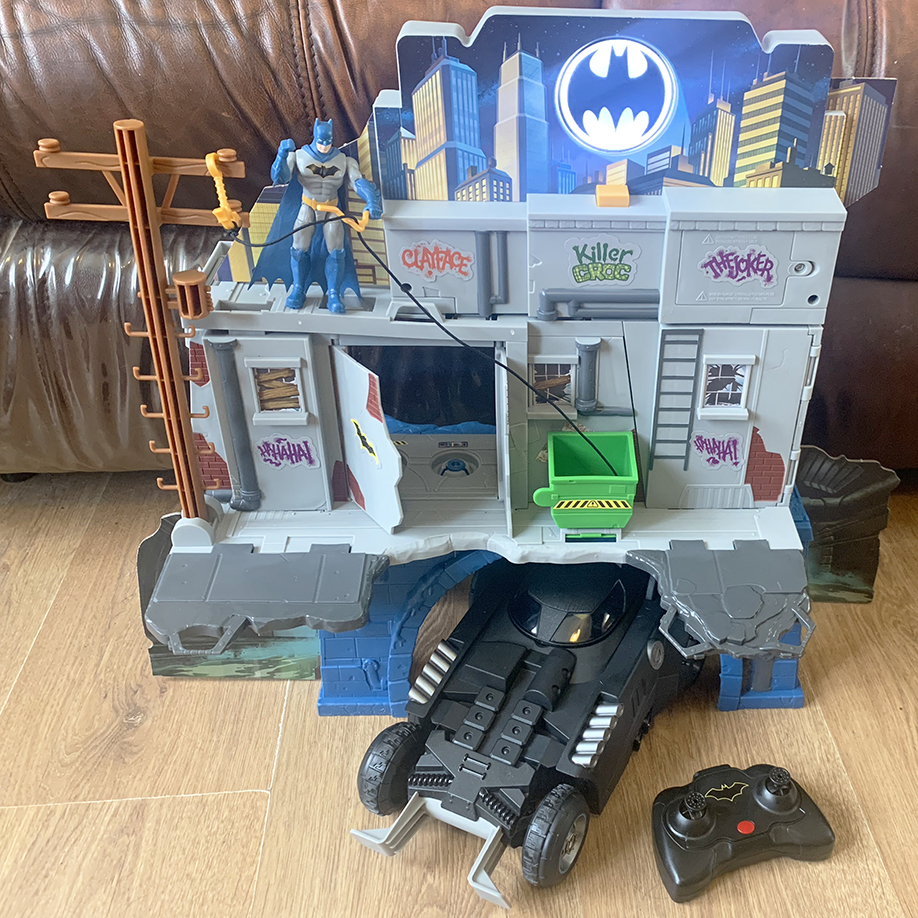 The Zip line worked a lot better than I expected it to. Usually these types of accessories are for show, rather than play. That’s not the case here though… How cool does Batman look, shooting down his zip wire, one handed! 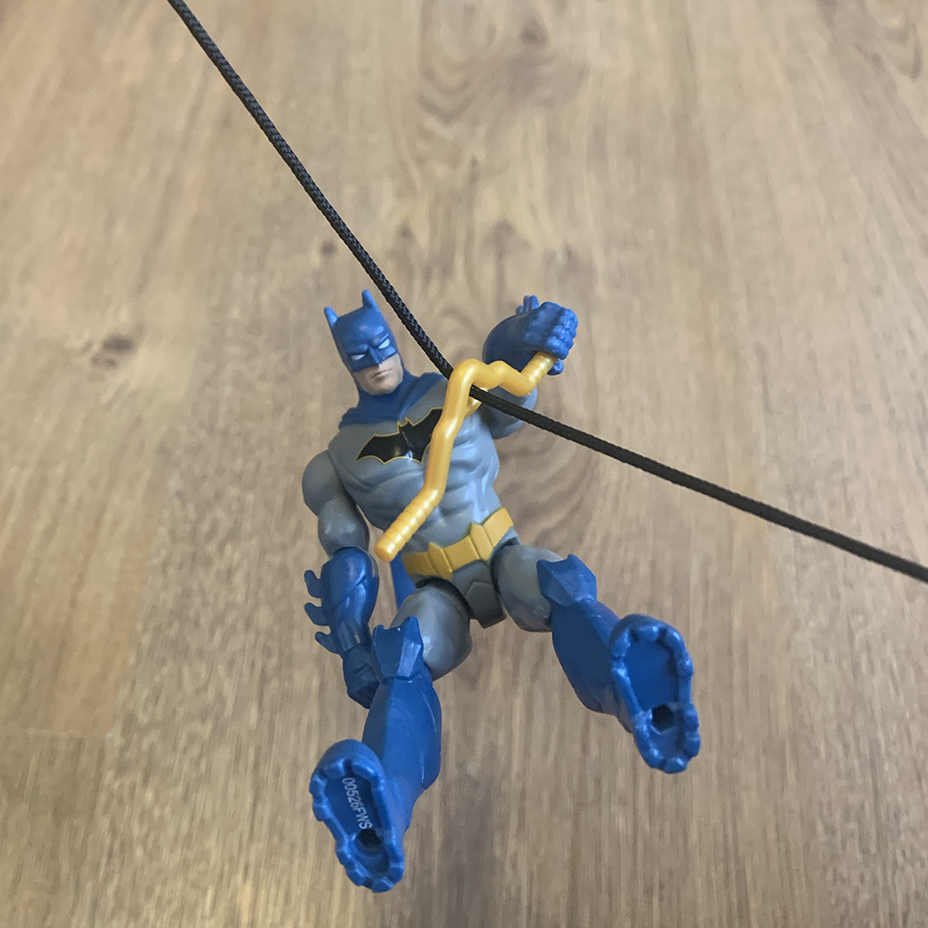 The included Batman figurine has posable arms and legs. His hips rotate and his knees bend. So he can be positioned in many ways. He also has rotating shoulders and bendable arms. This allows him to interact with the other figurines, which are available separately.

The blue Batman pictured below is the one included with this set. While the Batman dressed in black came with the batmobile. You can see the difference in the limb movement. 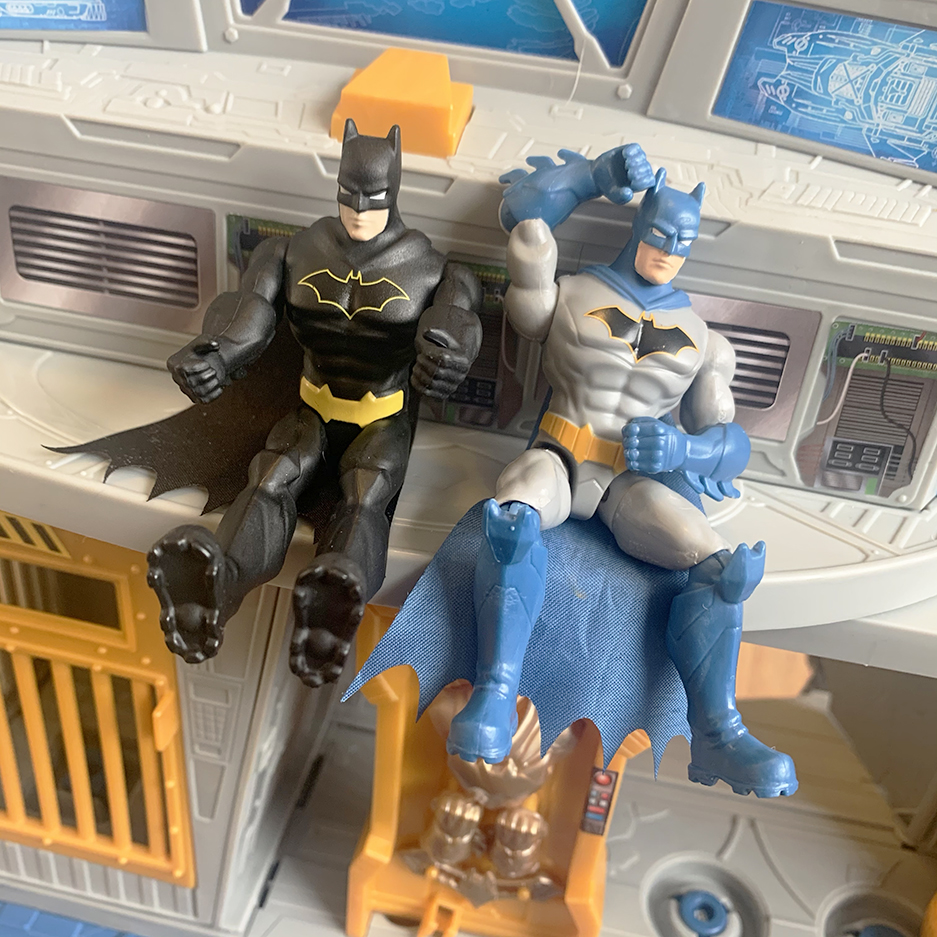 All told, I think the 3 in 1 Batcave is reasonable value. Be sure to shop around though, as there are some great Batcave deals available right now. The only thing I think this set would have benefitted from is an additional action figure. A “baddie” would have made the set more fun, and allowed it to be played with by more than one person at a time.

Finally, if you’re going to buy this set, you may want to consider buying additional 4 inch figures to maximise play potential. You can choose from: Robin, The Joker, Nightwing, King Shark and more.