It’s no secret that I’m a huge fan of Batman. Heck – my son was called Batman from the day I found out I was expecting him. His younger sister has the middle name Robyn. I’ll give you three guesses as to why, but you’ll only need one! So when I was asked to do a Batman Launch and Defend Batmobile review, I was happy to agree.

The Batman Launch and Defend Batmobile is suitable for children aged 4 and over, and has an RRP of £39.99. It is made by Spinmaster and requires 2x AAA batteries for the controller, and a USB connection to charge the car.

Rather than spending ages explaining how to unbox and set up the bat mobile, I made this video so you can see for yourself.

The first thing I thought when I set up the Batmobile was that it feels really sturdy. I loved that the bat mobile was fully charged, so ready to use straight form the box. You do have to provide 2x AAA batteries for the controller, so be sure to buy those in advance if you’re gifting this toy. I was also impressed that the vehicle windscreen lights up when the car is charging. So you know its definitely connected.

When you put Batman into the batmobile, I find it easier to push the ejector seat down before sitting Batman inside. The photo below shows the ejector seat. The first photo shows Batman sat on the seat. As you can see, his legs are on either side of the grey leg separator.

In my experience, if you don’t sit batman like this, the ejector seat won’t work properly. Next, the top -right image shows the ejector seat in its “up” position. You need to push it down until it clicks (like in the bottom – right photo) before sitting Bamtna down. 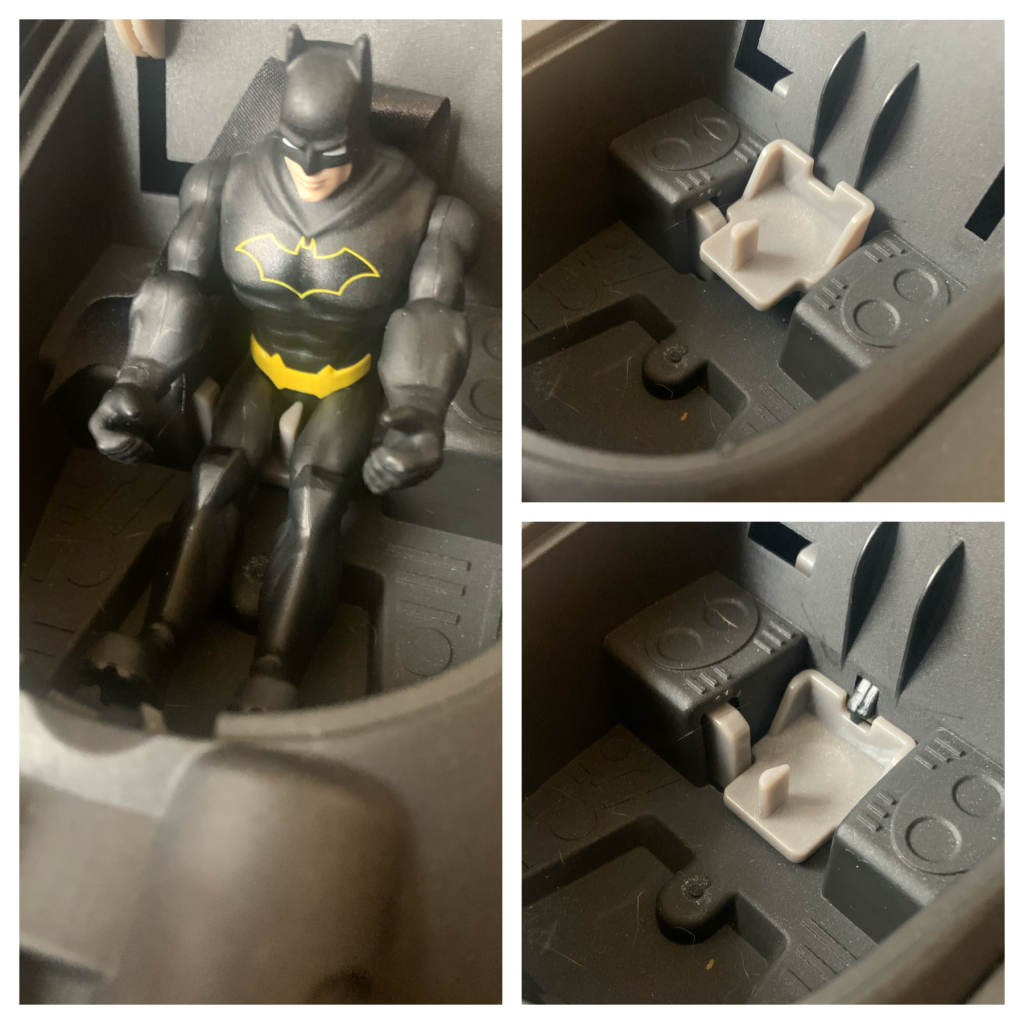 Once Batman is sat down, put his arms down so you can close the car roof. Then feel free to drive your Batmobile as you see fit. When you feel the need to fire Batman from his vehicle, press the red button on the remote control car.

I haven’t timed the exact length of time between charges, but it’s been several hours of intermittent use without dying. I then charged it overnight and it held up the next day too. Again with intermittent use through the day. Be sure to remember to switch off the car on the base when not in use, so it doesn’t drain the battery. Also make sure you fasten the USB storage hatch securely. 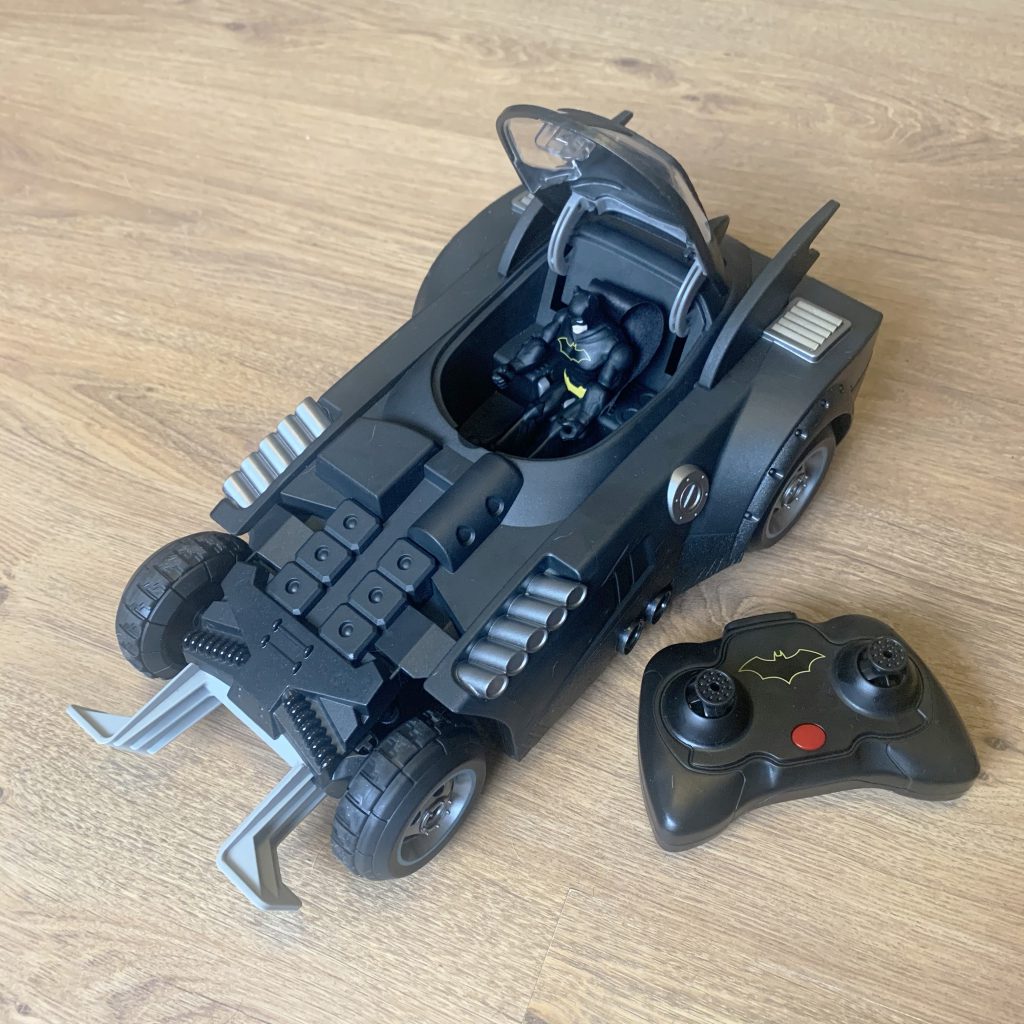 Size wise, the Launch and Defend Batmobile is a 1:16 scale model of the car from the movie, so it’s a decent size. Batman measures 4 inches / 10cm in height, when stood up.

I love that the batmobile can be played with independently, and also works with the 3 in 1 bat cave playlet (pictured below). That set comes with an exclusive batman figure, which is dressed in blue and more posable. He fits in this bat mobile but doesn’t jump as far when you eject him. 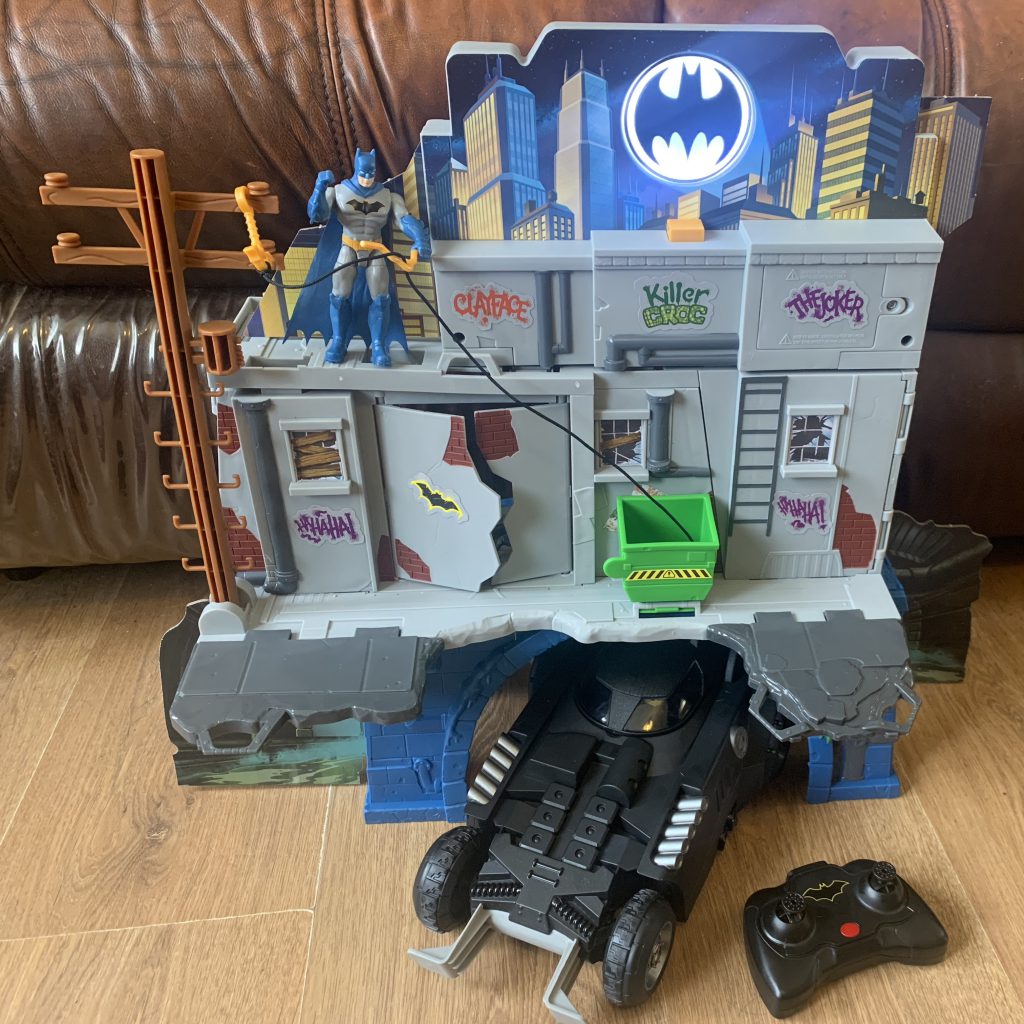 All told, I really like the batmobile. I can’t wait for a dry day, so we can take it to the park. The RRP of £39.99 is fair, but do shop around – there are some incredible half price bargains available at the moment!

Finally, check out the #BeTheBat twitter party on Tuesday 10th November 2020 to be in with a chance of winning some of the range.