I was recently asked to do a Smart Trike Safari Tiger review. It is a 4 in 1 trike, which grows with your child. Sydney is still a little young for it, so Sam has tested it. It is suitable for children aged 10 Months to 3 years. Read on to find out what we thought. 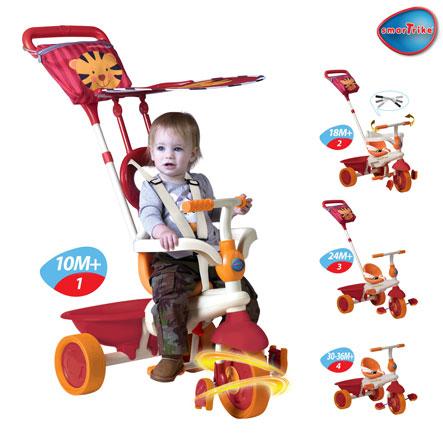 The foot rest, high back support, enclosing chair arms and seat belt are all used to keep your baby safe and secure when using the Smart Trike at age 10-18 Months old. The stylish canopy can be used for shading your baby, too. The parent uses the long rear handle to control the trike.

The parent still controls the trike, but the seat converts. The baby still needs the seat belt, chair arms and front-wheel clutch for safety, and they enjoy their ride while developing confidence, balance and motor skills.

At 24 months, the Smart Trike becomes a training tricycle. It allows kids to learn how to use the non-slip pedals, while their parent can keep control of the trike for as long as required, thanks to the parent handle.

Once your child is ready, you can remove the parent handle, close the safety clutch and convert the Smart Trike into a fully independent trike.

DaddyGeek assembled our Smart Trike Safari, and he said it was “easy enough” to build. The instructions weren’t very specific as to which bits were necessary for each stage, so he did have to dismantle some of it. This wasn’t a major issue, though.

The handle removes easily enough, and we can fit the trike and our Phil & Teds Vibe tandem pushchair in our boot at the same time. (We have a Vauxhall Insignia). It is 80% full when both are in there, though.

When we first took Sam out for a ride on his new Smart Trike, we had put the seat a little too far back, so he was struggling to pedal for himself. We couldn’t adjust the seat while we were out as a screwdriver was required, but we just switched off the pedal motion, so Sam could rest his feet on them, without them going round. 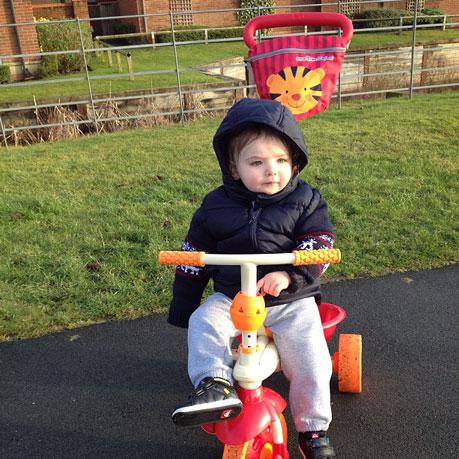 I found it much easier than anticipated to get the Smart Trike up and down small kerbs. You can tip the trike easily, and Sam didn’t seem phased when I had to do this. It is easy to turn round corners too.

The bag which is attached to the handle is brilliant for popping in a few snacks or a small drink. (Or a nappy and a few wipes). The trike has a tipping bucket on the back of it, too. This is perfect for popping the odd toy into, or a loaf of bread if you take the Trike to the shops!

When we got home, DaddyGeek moved the seat forwards, and the next time we used the smart trike, Sam was able to pedal it himself. He happily did this for a few minutes, but did tire quickly. With this in mind, the on-off pedal action is absolute genius. Sam loves being pushed around on the Trike, but I don’t think he’d be so happy if he had to pedal the entire time.

As far as safety goes, Sam felt really secure in the lap belt. He is only 18 Months old, but very large for his age. I was worried he would need the side bars, but he was absolutely fine without them. (He wouldn’t fit comfortably with them in place, and as he wasn’t slipping or sliding off the seat, we set it up in stage 3 mode.

The quality of the Smart Trike Safari is good. The only improvement I would make would be the ability to turn the handlebars more, or fold or remove them easily so you could fit it into a smaller car boot or cupboard for storage.

All in all, I really like the Smart Trike Safari when it is set up in stage 3. I haven’t used it in stage 1, 2 or 4 yet, but will update this review in a few months’ time once Sydney has had a go in stage 1 set up.

I would definitely recommend the Smart Trike Safari though. It is good value for money, and built to last. There aren’t many Children’s toys which will last for years, and grow with your child.

I would give the Smart Trike Safari 4/5.
It lost 1 point because the parent handle isn’t height adjustable. Additionally, the handles aren’t easily removed, or foldable for easy storage.

This is not a sponsored post. I was sent the Smart Trike Tiger to review, but all words and opinions are my own. Finally, if this Smart Trike Safari Tiger Review has been useful, check out this post.