PHEW! Yesterday was a crazy busy day in our house! We held our first UKMumsTV Twitter Party! It was Doc McStuffins themed, and the kids LOVED it! I hear the Twitter party was a huge success too, and #DocMcStuffins was trending despite Madonna’s attempts to fly at the Brits last night! If you joined in, I hope you won some fab prizes.

Here’s a few photos of the pre party prep for our Doc McStuffins Twitter Party at home…. 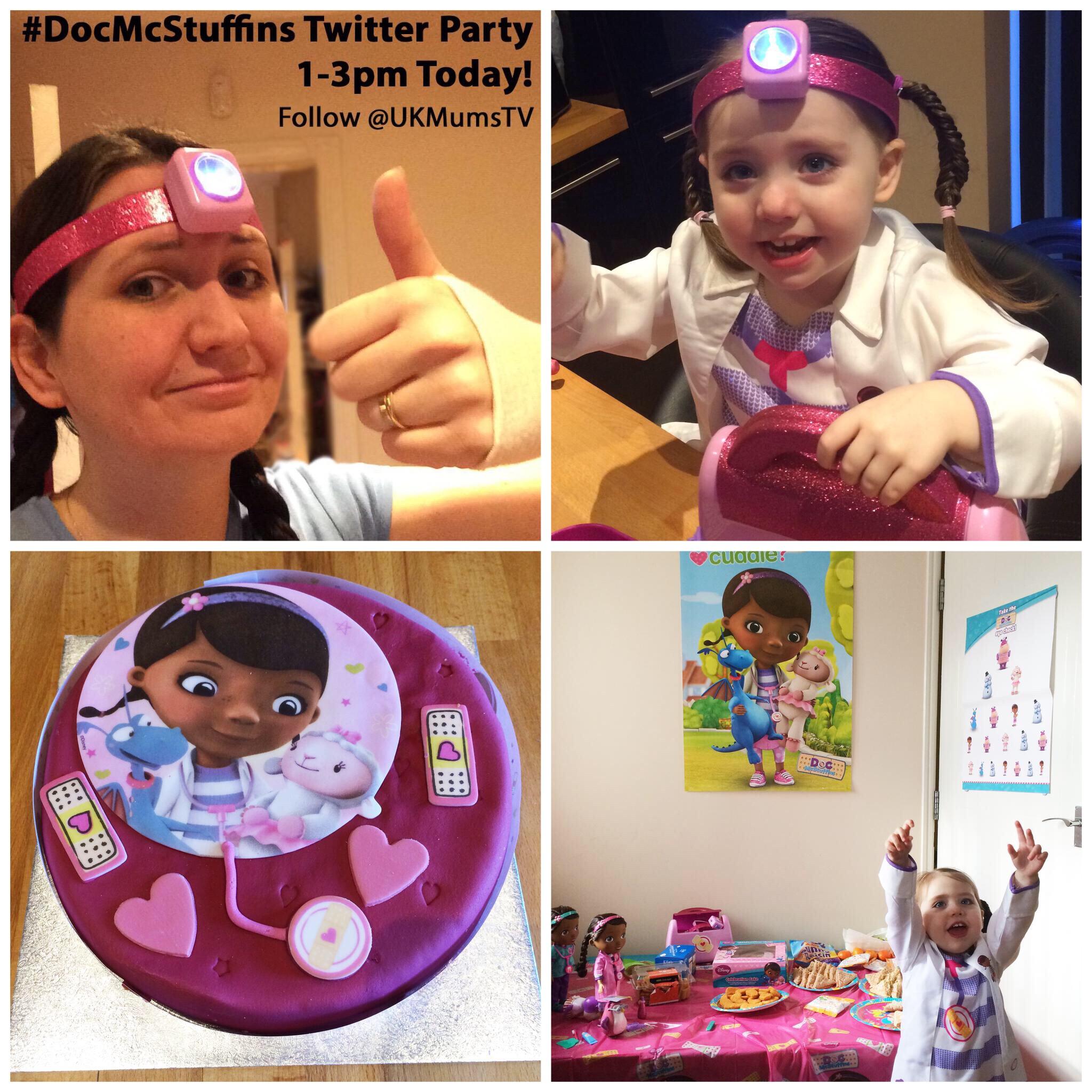 I’m such a good hostess, I had to “check” the toys were working ahead of our party…!!

Syd loves the Doc McStuffins Eye Doctor Bag – she barely let go of it all day! It’s down to £15 at Smyths Toys at the moment, but has an RRP of £20.

It took all of my willpower not to eat the cake before our guests arrived!

Syd helped me set the food up – We had lots of healthy items including yummy Ella’s Kitchen bits, Ham and yummy Cheese sandwiches for extra calcium, lots (and lots) of fruit, Hummus Hedgehogs (blobs of hummus with carrot and bread stick “spikes”). Then we had the cake for afters!! Yum. 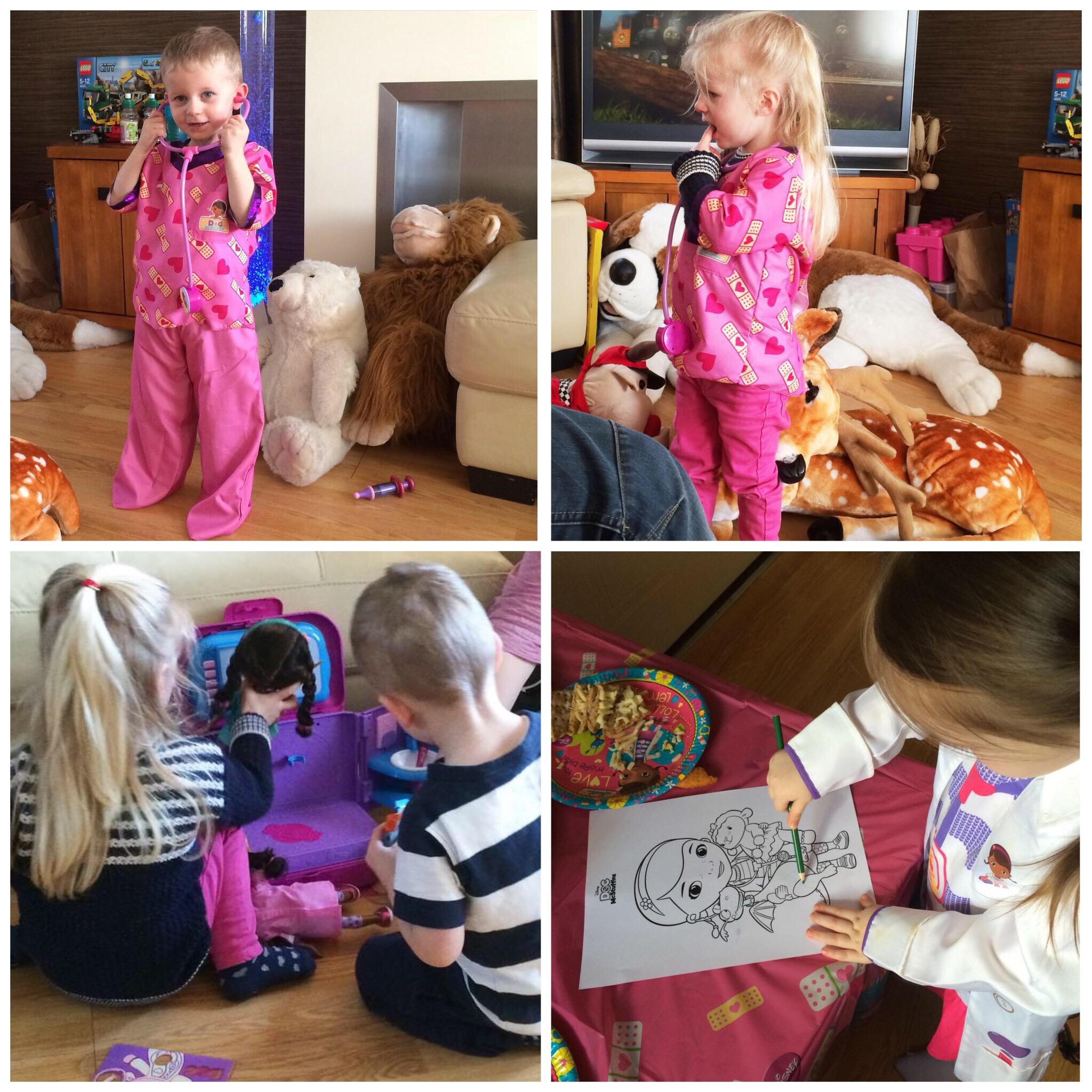 When the first game got underway, T and L both managed to get the scrubs and Doc McStuffins light up Doctor Shoes on. So they each won a prize! (The Doc McStuffins Scrubs are down to £10 in the Smyths sale at the moment, too)! So far, our Doc McStuffins Twitter Party was going well!

Game 2 was tic-tac-toe, but it was a bit hard for our young guests, so instead we talked about cleaning our teeth. The twins brushed Dentist Dottie’s teeth in the Carry Along Clinic’s sink, too.

When it was time for our lunch break and free play, Syd headed straight for the pencils and did a spot of colouring! 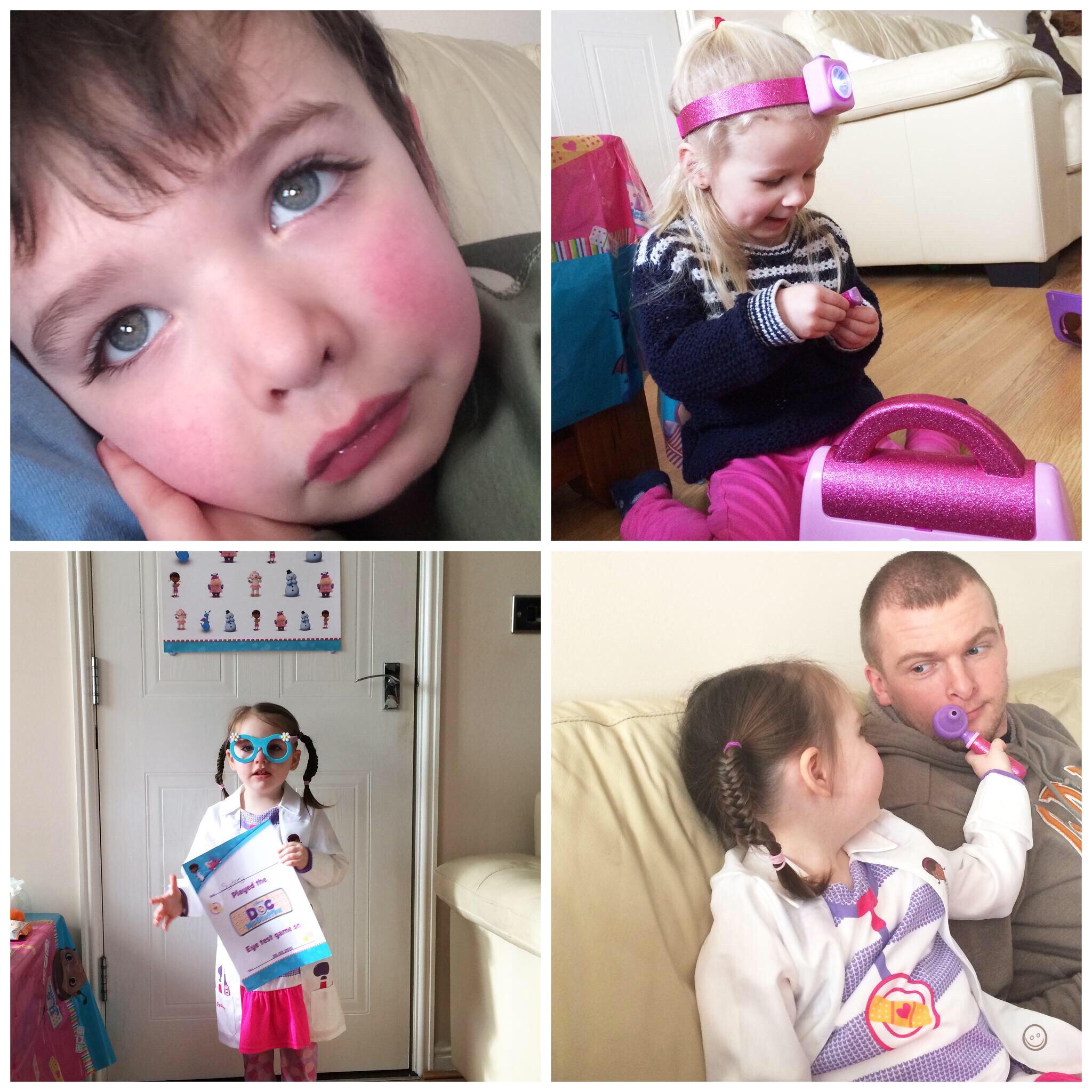 Sam has autism, and was a little overwhelmed at times. He did really well though, and sat watching the kids play from a little way away. When it was time for the 3rd game, L was very keen to help test Syd’s eyes. Sydney was thrilled when she passed her test and got a certificate. She is modelling the glasses from the Doc McStuffins Eye Doctor Bag she has been carrying round all day!

Even Uncle Steve had his eyes tested! 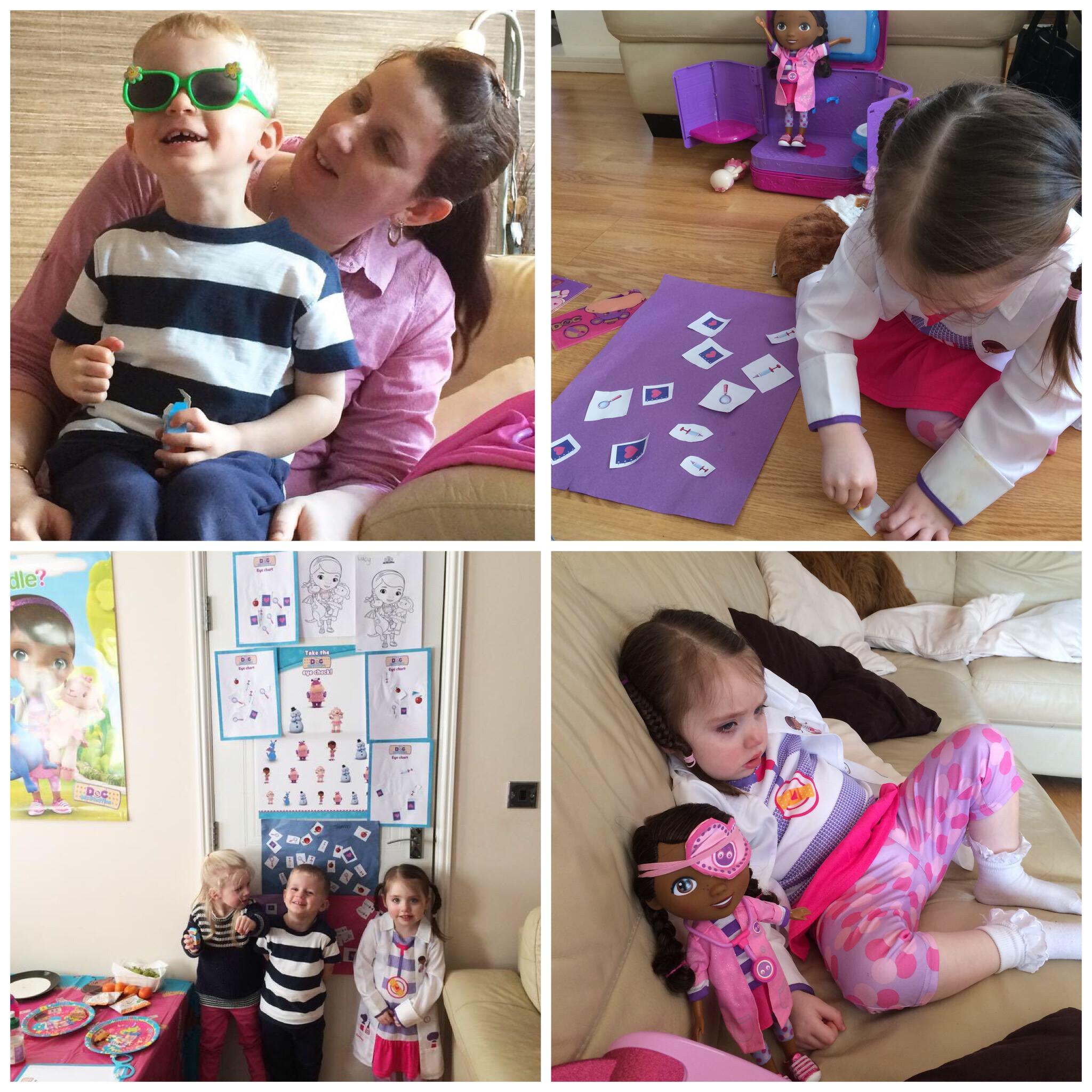 T wasn’t fussed about joining in with the craft activity – he loved the play sunglasses, though!

Sydney spent ages working on her Eye Chart – she was very proud of it. L joined in too, though I didn’t manage to get a photo of her hard at work.

The kids did a LOT of drawing and glueing today. (I did the cutting in advance as I’m not one for having scissors around when there are so many things going on at once). They were all very proud of their handy work. The parents helped out too!

Once Syd had given the party bags out and waved goodbye to our guests, she sat on the sofa with poor Eye Doctor Dottie. I think Syd had a bad case of “Party-Over-Itis” as she was far too poorly to help with the tidying up!

All told, I think our party was a huge success. The kids loved it, and the parents had a fair few giggles too! We sent the twins home with the scrubs, flashing shoes and Dentist Dottie, as they were both really taken by them, and had been so well behaved all day. In fact, all of the children were amazing, considering how crazy busy it all was. We had a couple of poorly friends who didn’t make it to the party, but we still managed to have an amazing time. In fact, it was so chaotic, we barely had time to tweet, so apologies for only managing to share photos. (Hubby was in charge of my phone while I was busy playing hostess).

If you enjoyed this UK Mums TV twitter party, keep your eyes peeled for exciting news about another one which is happening in the near future…!!

If you missed the Twitter Party, check out UKMums.TV for some fab competitions, including Doc McStuffins prizes! New episodes of Doc McStuffins are on Disney Junior at 4.55pm.

Why not visit DisneyJunior.co.uk for more fun Doc McStuffins activities and games.