This week, we’ve been busy doing Top Secret stuff as part of our Bigjigs Play Patrol Top Secret mission…. The time has come for me to share it with you. Last week, we received a large box. Inside, was a cap, tshirt, certificate and product each for Agents BatSam and Robyn to test.

They received a Clickety Clack Bridge and a Santoys Transporter Lorry. Both were securely packaged, and I didn’t need any tools to remove them from their packaging. (Always a bonus in my book)! 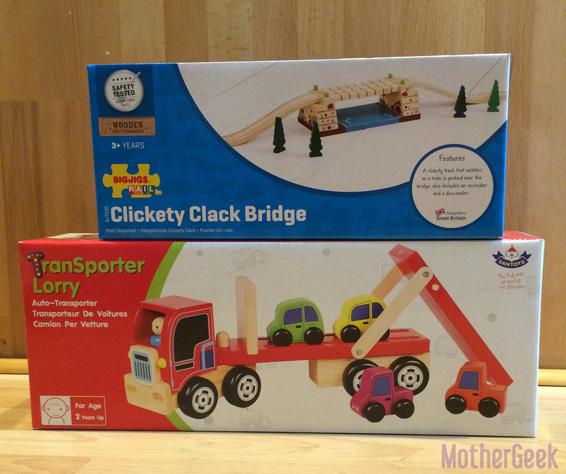 The car transporter immediately became the most played with toy in the house.It usually takes Sam a few days before he will play with a new toy, but he took to the Car Transporter straight away. 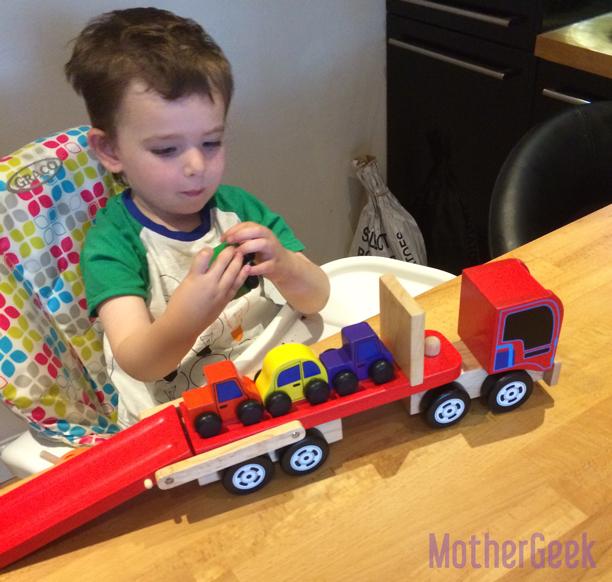 Sam has autism and doesn’t speak, but he was making brum noises and saying “caaaa caaaa caaaa” as he put the cars on and off the transporter. The Top layer is a little stiff to move from the top position down to the ramp position at first (shown above). After 5 days use, it is starting to loosen up a little now, though. Sam had no issues moving it, but Syd did struggle.

On Monday, we had an impromptu trip to the park. The Car Transporter came along too. Syd spent ages sliding the card down the ramp. 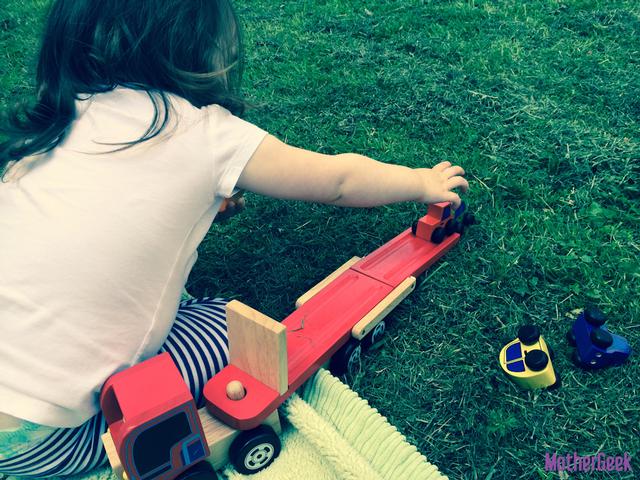 The Transporter kept her entertained for ages, and when she decided it was time to do roly polys in the grass, I *may* have had a sneaky play, too… 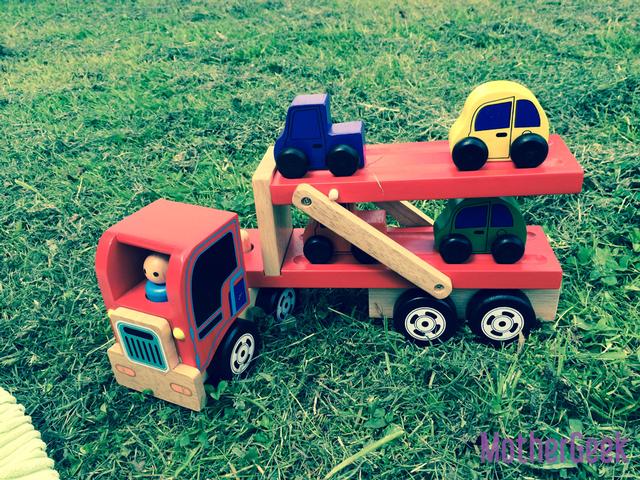 All told, we all really like the Car Transporter. The driver is fixed in place, so you don’t need to worry about him getting lost. The cars are just the right size for Sam and Syd to hold (they are 3 and 2 years old, respectively). The wheels are all really firmly in place – not rickety like some toy car wheels feel. The car transporter section is held onto the lorry by a peg. It is really easy to lift it off, if your child wants to use either part separately.

I give the Santoy Transporter Lorry 5/5. With an RRP of £24.99, it is money well spent. It feels strong enough that I am confident I’ll be putting it in the attic in a few years’ time, ready for the next generation of geeks to play with it, when the time comes.

I made this video, to show you both of the toys in use – Syd was the main tester on both videos, as Sam was busy being a total grump due to it being too wet to play outside…

The Clickety Clack bridge comes with two ramp pieces. It is really sturdy, and doesn’t feel at all fragile. I set it up the train set on Saturday while it was wet. Sydney loved it. She kept saying “uh ohhh water” as the train went over the bridge. 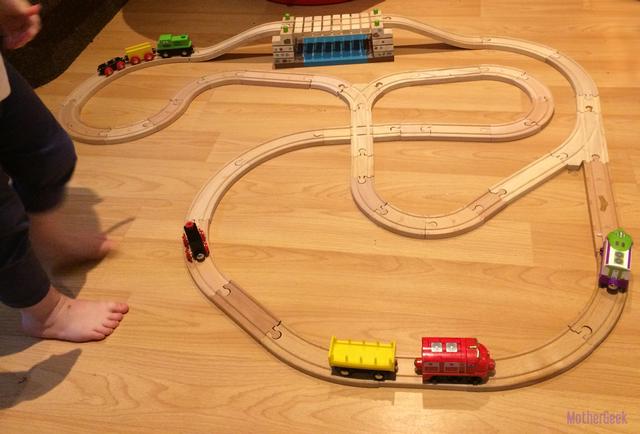 We set it up with our existing wooden track (which is a mixture of different manufacturers). The bridge is compatible with all of them. I have to say, the “clickety clack” noise wasn’t quite as prominent as I had expected, and the train didn’t really wobble much, either. The tracks are connected by a plastic coated wire, but it is really strong, so there’s not much movement like you get on a normal bridge of this style. 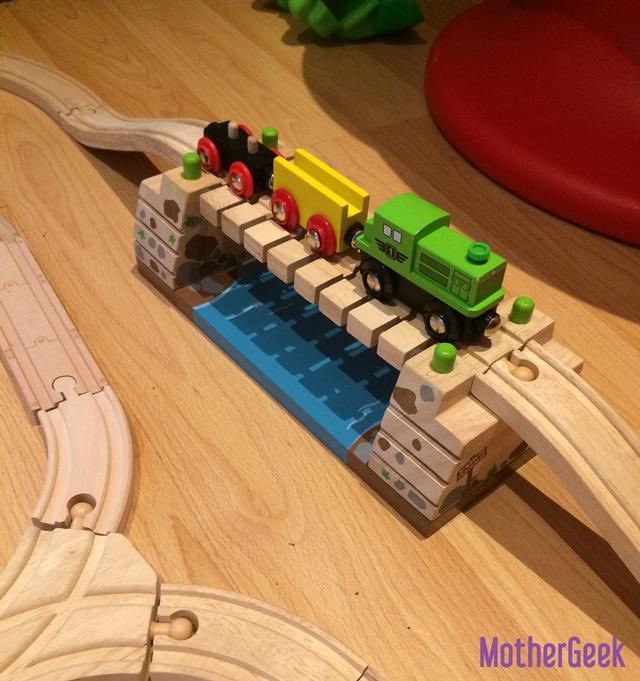 The bridge is really well made, and solid to hold. It isn’t fragile at all. The attention to detail is brilliant. The water glistens and really looks like water – not just blue paint. The RRP is £15.49 is a fair price. It has added a new element to our wooden train set. I give it 4/5 as I felt the clickety clack noise wasn’t as prominent as I’d hoped. It is still a fab bit of kit, though.

Our secret mission for this task was to take a photo of the toys in an unusual setting. We managed to take the Car Transporter to the park, but we didn’t have time to take the train set anywhere exciting. We did try to build it on the trampoline, but that didn’t work quite as I’d hoped. (I spent half an hour trying in vain to construct the track, only for Secret Agent Syd to keep bouncing on it)! So the most unusual place the Clickety Clackety Bridge was photographed was our hall way. (Sorry Bigjigs – Sam refused point blank to wear the cap or tshirt you’d kindly sent him as they didn’t smell of his fabric softener… I have washed the top now, so hopefully he’ll wear it for our second mission)!

If you enjoyed this PlayPatrol review, why not follow Bigjigs Toys on Twitter where they’ll be sharing more, via the #playpatrol hashtag.

This is not a sponsored post. We were sent the times to review, but all words and opinions are my own.