I was recently sent a Fitbit One Advanced activity and sleep tracker to review. When it arrived, I was immediately struck by just how small it is. It measures in at: H=48mm W=19.3mm D=9.65mm. It weighs just 8grams!

I made this unboxing video to show you what’s included…

The Fitbit one has an RRP of £79.99. As well as the activity tracker itself, you get a silicone and metal clip, a wireless sync dongle, a USB charging cord, a sleep wrist band and a free fit bit membership.

So… what does this tiny gadget do, exactly? It tracks the number of steps you take, flights of stairs climbed, calories burnt, hours slept, distance travelled and your quality of sleep. During the day, you can wear it clipped to your belt, your pocket or your bra. When you go to sleep, you pop it into the Sleep Wrist Band to track your sleep.

Let’s start at the beginning…

Once I unboxed the Fitbit, I followed the instructions on the setup guide and set up my online profile. I was prompted to download the app, which I did. In less than 5 minutes, my account was all set up. My Fitbit needed charging straight away. It took 90 minutes to charge, and this power lasted for 12 days.

Once my fitbit was charged, I connected it to the iPhone app, and I connected my Fitbit and MyFitnessPal accounts. This was really easy to do, (via the apps and devices option on the MyFitnessPal app). The fact it syncs with My Fitness Pal means you don’t need to enter your food and weight information twice – it’ll automatically sync. Likewise, the MyFitnessPal app will automatically show how many calories you’ve burnt based on the data passed over from your Fitbit.

The Fitbit One works out the calories burnt based on your height, weight and age info you enter into your profile. This will update automatically when you update your weight and goals on MyFitnessPal. The wristband will also monitor your sleep patterns, and allow you to see how much sleep you’ve had.

I tend to clip my Fitbit to my bra. It is very easy to forget it’s there, and I am not constantly worried about losing it as I am in and out of my pockets so much. I did accidentally put it into the laundry basket one day last week, but thankfully I realised what I’d done before I did the washing. The silicone and metal clip holds the Fitbit really securely. It doesn’t slide easily off your clothing, and the device is very secure once it is inside the silicone housing, too.

Speaking of getting it wet… The Fitbit One is rain, splash and sweat proof, but not submersible. I wouldn’t wear it for swimming, steam rooms or such like. I wore it when it was pouring down last week. I got soaked to the skin, but my Fitbit lived to tell the tale.

I have been wearing my Fitbit for well over 2 weeks now, and I love it. I am in the process of trying to lose my baby weight, and have been using my fitness pal. The fact my burnt calories automatically show up in my fitness pal has been a huge factor in my staying on plan. It helps me to see how well I am doing, and to get up and do a bit more each day.

I am going to review each feature in turn now, to tell you how I have found it… 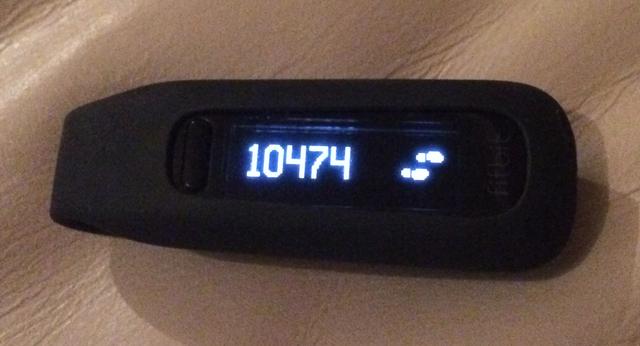 I have an average of 8639 steps, based on the past 2 weeks. This has been pulled down because I forgot to put it on one day last week. Overall, I feel the Fitbit One tracks your steps really well. 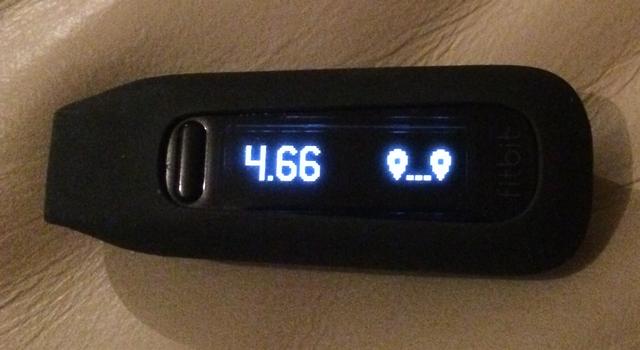 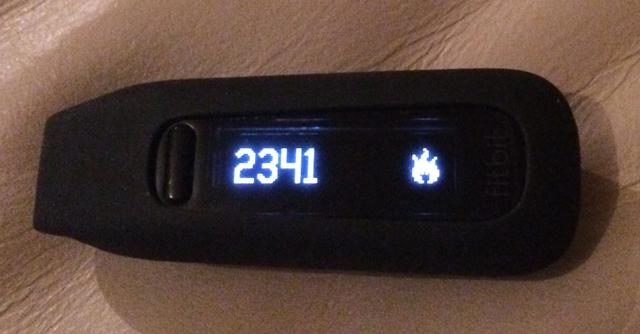 To begin with, the Fitbit app and tracker show an estimated number of calories burned based on your BMR (Basal Metabolic Rate). This is calculated using the height, weight, age, and gender information you provide when you set up your Fitbit account.

When you sync your tracker, Fitbit replaces your estimated calorie burn with your tracker’s data. If you manually log activities, the calories burned by doing those will be taken into account as well. The more you wear your Fitbit tracker, the more accurate your calorie burn data will be.

My average calorie burn rate per day is 2333 based on the past 2 weeks’ use. I have no idea how accurate this is, as there is no accurate way of being sure… BUT the information it passes to MyFitnessPal is much lower than what the Fitbit app shows… EG: For Monday 14th July, Fitbit says I burnt a total of 2463 calories, while My Fitness Pal shows I burnt 607 calories based on the 10k steps I did. I assume that Fitbit is talking into account my resting burn, where the info my fitness pal takes is based on my active burn (steps and exercise I manually add to the Fitbit app)? Either way, the amount I burn each day seems to fit well with the amount of exercise I have (or haven’t) done, so it does encourage me to stay out of the biscuit tin! 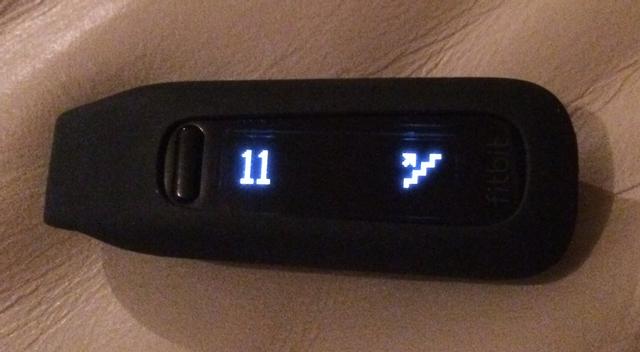 I live in a 3 storey house, so climb a lot of stairs each day. The Fitbit only counts the stairs you climb if you are continuously moving. (If I am holding the kids’ hands and its’ a slow walk up, it doesn’t register). This is because the Fitbit registers a floor when it detects continuous motion combined with an elevation gain of about 10 feet. It is very accurate as long as you are walking up steadily. It doesn’t like stopping and starting, or two feet on each step sort of speeds. The stairs climbed feature doesn’t work on treadmills, stair masters or other gym equipment as they don’t go high enough to register the change in elevation.

I am usually on the go for most of the day. I spend my time walking at a toddler’s pace, though. The Fitbit doesn’t recognise this pace as being active. If I am pushing the pram and walking briskly, this counts as active time. Trampolining is also counted as active.

Fitbit’s opinion of active and my opinion are slightly different. I have spent hours in the park, pushing swings, helping toddlers up and down slides, spinning roundabouts and it’s not been classed as active time. Your activity log on the Fitbit dashboard doesn’t give you many options to choose from. It does have a timer, so you can work out exactly how long you do each activity for, but I find adding exercises to my fitness pal first and importing the data to Fitbit works best. 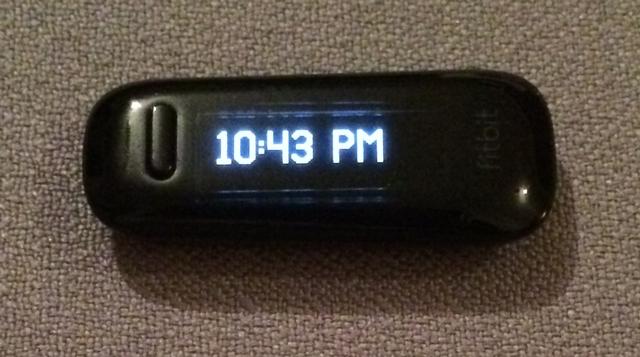 The Fitbit has a clock display, which I have found really useful. It has a really cool alarm feature, too. You set the alarm via your Fitbit app, and it’ll vibrate at your chosen time, thus waking you up but not your partner. I’d love to tell you I’ve used this, but my toddlers never let us sleep in late enough for it to wake me!

Each day, you can check your progress with all of the above on your Fitbit itself. You just press the button to flick through each one and see how you’re doing. It’s brilliant that you can do this, as it means you can leave your phone behind – an exhilarating experience!

I have remembered to pop the Fitbit into the wrist strap and press the button to activate sleep mode most nights. The data you get back isn’t 100% accurate in my experience. I have woken up and looked at my bedside clock a few times, and there’s been no mention of my being awake at that time the following day. It works based on your movement, so if you’re not moving around, it still thinks you’re asleep. It is good when I’ve been up and down all night with the kids, though – I love showing hubby “proof” of just how little sleep I got.

The wrist band is quite large, and it can be a little fiddley removing the Fitbit from the clip, and popping it into the wrist band. It sometimes gets a little sweaty, too.

Fitbit have added a really fun “chatter” feature… If you put your Fitbit down, then pick it up again after a few seconds, a fun message pops up on screen. These can be motivational or just laughable – I managed to catch a few on camera – take a peek here!

There is also a Fitbit friends feature – you can add friends and see how they are getting on. This can help motivate you and get some competition going. I haven’t really used this as I find MyFitnessPal great for this sort of thing. You can also join communities and support forums via the Fitbit website. I haven’t done this either as of yet.

All told, I love the Fitbit. I have recently reviewed a Jawbone 24 as well, and I have found the Fitbit to be much more accurate and informative in all areas except sleeping. I feel it is amazing value for money, and it is definitely keeping me on the straight and narrow with my weight loss.

This is not a sponsored post. I was sent the item to review, but all words and opinions are my own.